Claude Cahun (1894 – 1954) was a French photographer and writer famous for her ambiguous photographic portraits. Born Lucy Schwob, the artist assumed the pseudonym Claude Cahun – a gender-neutral French forename coupled with her grandmother’s surname – in 1917. With this new identity Cahun was able to distance herself from her well-known literary family and reject what she saw as the narrow confines of gender.

Whilst studying in Paris, Cahun became involved in the emergence of the surrealist movement. Although she contributed texts to their early published works, Cahun operated on the margins of the surrealist movement and never became a member. To do so – in Cahun’s eyes – would have meant surrendering her own identity, the exploration of which formed the basis of her work.

In 1938 Cahun escaped the impending Nazi occupation of France and fled to Jersey with her lover and collaborator Marcel Moore. It was in Jersey that Cahun began the photographic work that she is best know for: a series of theatrical tableaus which see the artist blur and distort her age, identity, gender and surroundings in order to assume different personas. Largely unknown during her own lifetime, Cahun’s photographs – many of which have only recently received critical attention – anticipate the work of contemporary artists, such as Cindy Sherman and Trish Morrissey, for whom the subversion of traditional portraiture and the constructed nature of identity and gender remain a pressing concern.

The Claude Cahun: Beneath the Mask exhibition will be on display at Qube Gallery on Oswald Road in Oswestry until 6th June. Entry is free and booking is not required. Qube is open Monday to Friday 9am to 5pm and Saturday’s 9:30am to 12:30pm. 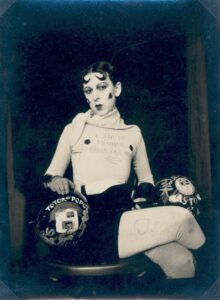 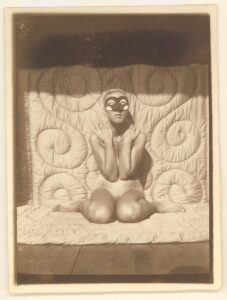