The board of governors at Oswestry School are thrilled to announce the appointment of their new
headmaster from January 2022.

Mr Peter Middleton is a graduate of the University of Bristol, where he studied English Literature. His
first teaching role was at Highbury Preparatory School in Kwa-Zulu Natal, South Africa followed by
three years at Loretto School in Scotland. Peter joins us from Shrewsbury School, where he started as
an English and Theatre Studies teacher in 2008. For eight years he was in charge of the school’s
famous Cross-Country club (one that enjoys the distinction of being the oldest in the world),
coaching them to two national titles and leading several overseas tours including to East Africa.
Following five years as Housemaster of Rigg’s Hall, one of 11 boarding houses at Shrewsbury, Peter
was appointed as Deputy Head Co-Curricular in 2016.

Mr Middleton takes the reins from Mr Julian Noad, who has been recently appointed as headmaster
for Queen’s College, Taunton.

Julian began his headmastership at Oswestry School in 2014 joined by his wife, Jane and two children
Molly and Henry; who have all made a remarkable impact on the school.
The governors would like to thank them for seven years of outstanding service to Oswestry School.
They will be sorely missed by staff, parents and pupils alike.

An exceptional field of candidates competed to become Julian’s successor and the governors are
excited to have appointed Peter, with his extensive experience in the independent sector and existing
knowledge of Shropshire.

Commenting on his appointment, Peter said:
“It is a huge honour and privilege to be appointed as the next headmaster of Oswestry School. It is a
school whose vision and values chime closely with my own, a school where each individual is valued,
nurtured and encouraged, and where inspirational learning takes place both inside and outside the
classroom. I am thrilled to be joining such a very special community”

Peter is married to Jenna, a part-time GP and sports medic, and they have three daughters: Isla (11);
Sophia (8); Rosie (6). The family are looking forward to moving to Oswestry School and in due course
meeting with pupils, staff, parents and the wider community. 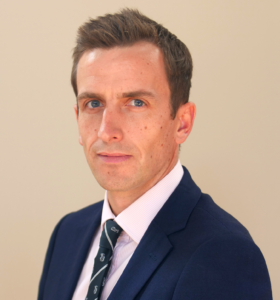