An iconic local monument representing the history of Oswestry, is in the planning for being refurbished by The British Ironwork Centre.

The monument, which features the great eagle of legend standing guard over the gauntlet of King Oswald, is currently located at St Oswald’s Well, by Oswestry School. Originally created and supplied by The British Ironwork Centre in 2015 as part of plan to assist in boosting tourism to the Shropshire town, the Ironworks will be collecting the monument to give it an overdue refurbishment.

As legend has it, King Oswald was killed during the Battle of Maserfield, and his arm was carried off by a giant bird, before eventually being dropped at the site of St Oswald’s Well.

This tale has become a keystone to the town, with even the name “Oswald’s Tree” eventually becoming Oswestry.

The revamp of St Oswald’s eagle and gauntlet will herald the start of a refurbishment plan of revitalising a number of sculptures across Oswestry, all created and organised by the British Ironwork Centre.

To find out more information, please head to The British Ironwork Centre at https://www.britishironworkcentre.co.uk/. 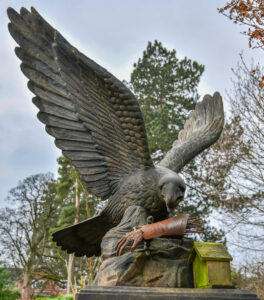