Johns’ Boys Male Chorus is one of the most decorated Welsh choirs in history. Formed in 2016 by Aled Philips, Johns’ Boys came together to celebrate the life of two composers and conductors from the village of Rhosllanerchrugog, John Tudor Davies and John Glyn Williams, in a celebratory Noson Lawen. It became apparent to Aled and all the members that it would be foolish to pass up on the chance to continue to make music together.

Success came quickly for Aled and Johns’ Boys, reaching the final of BBC Choir of the Year in 2016. Their successes didn’t end there as in 2019 they became the first Welsh Male Voice Choir and only third male voice choir in the history of the competition to win the prestigious Choir of the World at Llangollen International Eisteddfod. 2019 was an incredible year for the choir as they also were victorious in Côr Cymru and the National Eisteddfod of Wales.

Although many engagements had to be cancelled or postponed, Johns’ Boys have remained an active choir throughout the COVID-19 pandemic, raising £1000 for various charities through virtual concerts and online performances. They have also made numerous TV appearances, including Llangollen Eisteddfod’s Gala Concert (S4C), Noson Lawen 2020 and 2021 (S4C), as well as featuring on The Last Night of the Proms (BBC) representing Wales with their rendition of O Gymru arranged by Aled. The choir were chosen from a national search to appear in the upcoming Netflix blockbuster drama Stay Close.

The choir have appeared in many prestigious concert venues throughout Great Britain and regularly sing in the principality Stadium for Welsh Rugby Union home international games.

Choir members stem from all over North Wales and the northwest of England, with several choristers currently studying at the Royal Northern College of Music and the BIMM Institute, as well as other leading universities across the country. The singers have had much individual success winning major prizes in Eisteddfods and music festivals. The choir love creating music outside of the traditional Male Voice Choir repertoire, exploring Opera, pop music and the avant-garde, as well as premiering new music and performing arrangements written especially for them.

The choir are in great demand for concerts, TV appearances and have plans in place for future tours of Europe and Canada.

Aled Philips, Musical Director of Johns’ Boys said: “This will be our first concert for over 18 months and all the lads are so looking forward to be back singing to a live audience. It will be a pleasure to sing alongside, and with the wonderful Moreton Hall Chamber Choir in what is a super venue. An evening not to be missed.“

Helen Rayner, Creative Director of the HCT commented: ‘We are thrilled to be welcoming one of UK’s most prestigious choirs to The Holroyd. We look forward to a spectacular evening of music making’

Tickets can be booked at www.theholroydtheatre.co.uk 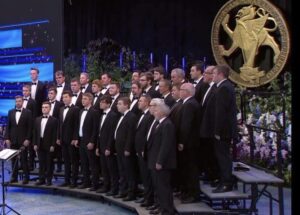