Opening the door to a lifetime of music

Previous Next
Opening the door to a lifetime of music

From April 4th 2022, Oswestry Rotary Club will move its regular meetings from a Monday lunchtime, when they have been held since the Club was founded in 1929, to an early Monday evening slot.

This week at their last ever lunchtime meeting, Club members invited guest speakers Mike Coppock and Sue Turner, trustees of the charity Music MOB (Music Matters in Oswestry and the Borderlands), to tell Club members more about the charity’s activities.

Mike spoke passionately about his subject: “As a committee member of the Oswestry Youth Music Festival, I could not help noticing that the proportion of entries from children in local State Schools was diminishing year on year reflecting its reducing importance to State Schools as compared to sport for example.

“Aside from their shared benefits, music will also improve a child’s thinking, language and reasoning skills.

“Music should, at the very least, be on an equal footing with sport.

“Music MOB’s’s aim is to ‘advance the music education of children living in Oswestry and the surrounding areas in full time State-funded education or being home educated up to the age of 18.”

The organiser of Oswestry’s Youth Music Festival, and herself a peripatetic music teacher, Sue explained that Music MOB’s aim would be achieved by providing funding for instrumental, singing and music theory teaching, and enabling access to musical instruments: “During the lockdown we were able to recruit 2 partner schools and deliver classes to 32 children across a range of instruments and singing.  We were delighted to see an immediate boost to the number of State pupils taking part in this year’s Music Festival.

“The recent award from the Mary Hignett Bequest Fund has helped us to expand our activities into further schools.”

“We are a small team of committed local music makers and I’m delighted to say that ‘Music is happening in schools now!'” concluded Mike, delighted that his idea was coming to fruition.

Oswestry Rotary Club member Don Howard was pleased that the valuable work of the Club in distributing the bequest of Oswestry’s late author and naturalist Mary Hignett would continue to be effective and carry on after the change of meeting time.

Don said: “We made 10 awards this year in the areas of sports and arts – the cycle starts again with applications in September 2022.

“We look forward to seeing this year’s requests and the fruits of the awards made.

“Music has been the motivating thread in the collaboration between Oswestry School and two Music MOB partner schools which has resulted in the ‘Songs for Ukraine’ event to be held at Holy Trinity Church at 6:30pm – 8:30pm on Sunday 8th May 2022 – a poignant and uplifting evening of music with the aim of raising significant funds for and awareness of the crisis in the Ukraine.” 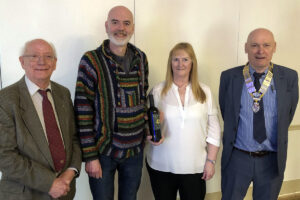