The parents of a five-year-old girl with a life-threatening heart condition are helping Hope House Children’s Hospices to fund its vital services this Christmas by sharing their story.

Little Amelia Thompson, from Oswestry, is on the front of thousands of envelopes being sent to supporters across the region this week and her story is featured inside.

Parents Charlotte and Dave recall how shocked they were when a nurse first suggested that they contact the children’s hospice.

“We thought it was because they thought Amelia wasn’t going to make it,” said Charlotte.

Amelia was Charlotte and Dave’s first child. Everything was perfect until a routine midwife appointment at 34-weeks flagged up that their unborn baby wasn’t growing as well as she should be.

Dave was working on the oil rigs at the time as an electrical inspector, so Charlotte’s mum, went with her to see the consultant and have a specialist scan.

“They came in and explained that a heart defect had been picked up and that it can come hand in hand with Down’s syndrome. It was just such a huge shock,” says Charlotte.

She got a message to Dave, who flew home the next day.

Three days later they met with another consultant who asked them whether they wished to continue with the pregnancy.

“I thought, ‘He can’t be asking this but he was,” says Dave. “We said we were still going to have our baby. What would be would be.”

Dave recalls: “We were just so relieved she was here. All the stuff we had been told just went away and you look at your baby and you love your baby. She was just Amelia and not anything else. We were just new parents.”

Amelia was taken to intensive care and a week later it was confirmed that she had a heart condition that would need an operation and Down’s syndrome.

There began a lengthy stay in different hospitals with the aim of getting Amelia’s weight built up before a cardiac repair operation.

Dave says: “We stayed with her the night before her operation and I did not sleep at all. She was in a little surgery suit and then we were allowed to take her down to her operation. There was a form to sign and it was horrible giving you percentages for survival.”

Charlotte remembers: “She was meant to be gone for about 8 hours but it took 10 hours – it was horrendous. We found out after it was because her stomach had erupted and they got a gastro team in and then a respiratory team because her lungs had filled.”

After six weeks Amelia was allowed home, but needed oxygen to breathe. Soon she was back in hospital again and her first Christmas was spent in intensive care.

For Charlotte and Dave life was completely taken over caring for Amelia – for a time they were even living in a camper van in a hospital car park so they could remain close by.

The family were referred to Hope House.

“I thought it was because they thought Amelia wouldn’t make it,” admits Charlotte. “Because I’d grown up locally I’d always known about Hope House. The nurse at the hospital had worked here and explained it was also for respite care.”

One visit was all it took to convince them that the hospice was just the place to help them to care for their seriously ill daughter. The place they could trust to take care of her medical needs and give them much-needed help and support.

“We came for a look around and a stay just after Amelia’s first birthday. We had had to be so careful to keep her away from germs and colds but we felt that Hope House was a safe environment. It was somewhere to come where Amelia could do new things like go swimming, and see other children and just play and do normal things. Jo was one of the first nurses to look after her.

“The first time we came, I came ahead with Amelia. Dave was coming from work and one of the nurses told him to stop and get a bottle of wine so we could spend time together. At first, I felt really guilty sitting there having a glass of wine while someone else was looking after Amelia. But we came downstairs to say goodnight to her and she was fast asleep – we definitely slept really well that night too.”

Dave agrees: “You are getting the specialist care of a hospital but with child-friendly surroundings. You know that your child is getting the same level of care that you would get in a hospital and you can relax. I know Amelia couldn’t be in better hands.

“We also know we could come here if we are struggling at any time, for instance, if Amelia’s feeding peg came out we wouldn’t have to go to the hospital. It is having that safety net if anything did go wrong that we could call here and know the staff are fully trained and able to help.”

Amelia may be out of hospital at the moment, but Dave and Charlotte know their journey has only just begun.

Meanwhile, she has started at a mainstream village school which she loves and, this summer, she became a proud big sister to little Alfie who is the apple of her eye.

“Amelia still has a hole in her heart and she still has leaking valves, but the medication is keeping it ticking over and she is not yet at a point where she needs more surgery,” says Charlotte.

“Until the day they tell us she needs more surgery, we won’t think about that. She still gets so tired because of her heart and people do forget. There are sensory issues too – crowded rooms, changes of scenery, a noise. It all gets too much for her and she just needs to sit and be quiet. That is what people don’t see.”

“I think in some ways I would change what Amelia has had to go through and what she has missed out on – but I would not change her. She does not suffer because she’s got Down’s syndrome, she has suffered because she has a heart condition, lung issues and stomach issues.

“We know in the backs of our minds that Amelia could have more surgery and there could be other things that crop up, but we don’t think of them because what is the point. If we start thinking about that now we are not going to enjoy the fun times. Because we missed out on so much with her being so poorly, we try and make up for lost time now.”

Dave agrees: “I wish I could go back now and tell myself back then – everything is going to be alright – don’t worry about it. The heart condition is what made it bad, that was the hospital stay, not Down’s syndrome.

“I didn’t realise that we needed Hope House at first but we definitely do. It is the only full-on break we get. You don’t realise places like this are paid for by charity – you think they are funded like the NHS.” 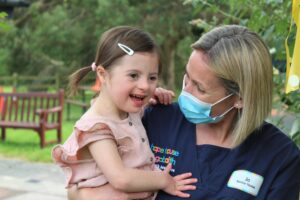 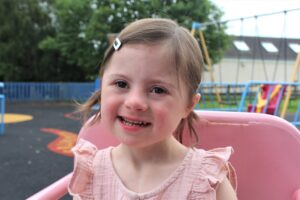 Amelia on the roundabout at Hope House. 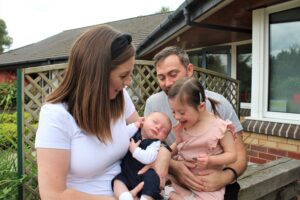 Amelia and her parents Charlotte and Dave with baby Alfie.