A local architectural designer has scooped a national industry award for one of his self-build designs.

Ke-design, which has offices in Oswestry and Shrewsbury, lifted the Best Self-Build For Under £250k honour at the Build It Awards organised by Build It magazine in the face of stiff opposition at a prestigious ceremony in London.

The award-winning design has been built in Trefonen, near Oswestry.

Craig Marston, who launched Ke-design in 2011, was the designer behind the award win. He set up the firm with the goal of improving the quality of design and services locally.

During the last 10 years Ke-design has built up an enviable reputation for designing and delivering many successful projects.

The Build It Awards were held at the Hilton London Bankside Hotel in the presence of more than 350 guests which included industry-leading architects, designers, and suppliers. More than 20 award winners were unveiled at the ceremony.

Mr Marston said: “The win came as a total surprise, and I feel very honoured for the Ke-design team to be recognised in this way.

“This award goes to show that a project doesn’t have to be a big ‘Grand Designs’ with a multi-million-pound budget to be well designed.

“The client originally had a planning application lodged for a local needs home. They weren’t 100% happy with the design and asked if we could redesign it after seeing our extensive portfolio of work.

“The Barn Field bungalow was built on the hillside in Trefonen by local builders Jones Brothers, has two bedrooms, a snug, vaulted ceiling open-plan kitchen, dining and living. The roof overhangs, creating an oak post veranda for the clients to sit outside all year round and enjoy the stunning views.

“The client didn’t believe they would ever enjoy living in a new-build property having lived in a farmhouse for more than 40 years, but they told us: ‘We feel so at home here and it has changed the way we live. We continually receive lots of compliments from locals and passers-by.”

Build It Awards judges said: “This year’s winners came into the project part-way through to reimagine a design for a boring red brick bungalow.

“They’ve created a simple yet stylish new home, packed with characterful details – and all for a build budget of just £150,000.”

The London awards were hosted by comedian Sindhu Vee and the guest speaker was Richard Bacon MP, a Right to Build Task Force Ambassador. 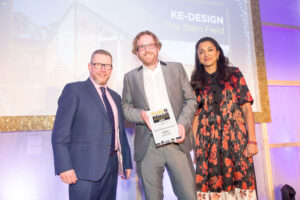 Pictured: Craig Marston (centre) of Ke-design wins Best Self-Build for Under £250k at the Build It Awards in London.. 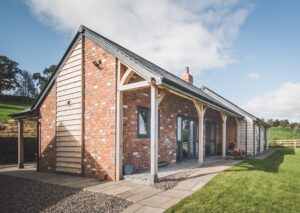