A local charity committed to helping children with movement difficulties through a unique and life-changing therapy has received a £10,000 grant from a wealth management company.

The money has been awarded by the St. James’s Place Charitable Foundation and will be used by The Movement Centre in Oswestry to provide five children with free Targeted Training therapy – a treatment which normally costs £2,000 and has to be met by their families.

To be considered for the grant, The Movement Centre enlisted the help of Nick Jones from Throgmorton Associates Wealth Management, a Senior Partner Practice of St James’s Place with offices in Shrewsbury and Leicestershire.

The Movement Centre is giving children the chance to gain more control of their movement and reach their full potential through Targeted Training therapy, the only therapy of its kind in the world. The treatment has been helping to transform the range of movement of children with cerebral palsy and other disabilities affecting their mobility for more than 25 years.

Johnny Wilkes, The Movement Centre’s Chief Executive Officer, said: “The £10,000 donation is marvellous news for us and the families who have children undergoing Targeted Training therapy in Oswestry.

“It will make a massive difference to those five families, meaning they will have access to this life-changing therapy free of charge, instead of having to pay the £2,000 contribution which they usually need to fundraise or fund themselves.

“We would like to thank the St. James’s Place Charitable Foundation for providing the grant and Nick Jones of Throgmorton Associates Wealth Management for assisting us in our efforts to apply for it.

“It all came about when we applied to the St. James’s Place Charitable Foundation for funding and were told we needed to do it through the St. James’s Place community, which was Nick and his company. We received the money last month and it will be vital in off-setting the direct costs to families as stipulated in the grant agreement.

“Nick and Chimene joined us for our open day towards the end of the month and said they were delighted to have been able to support us in this way. We are extremely grateful for their efforts and the awarding of the grant.”

Nick Jones, of Throgmorton Associates, said: “We supported this application because it was a local cause and having visited the centre and seen the difference it is making to families, it’s amazing and will really change the lives of some of the most vulnerable people in society.

“The Movement Centre is a hidden gem and I’m so proud we can get involved and help people access what is a very personal and bespoke service. If it means more families can benefit then it’s a win-win!”

St. James’s Place Charitable Foundation has been supporting those in need for 30 years with the goal of making a positive and lasting difference to people’s lives through grants to support the incredible work of grassroots charities.

It’s the third largest corporate foundation in the UK and since 1992 has granted more than £110m to charities, provided funding and support to more than 800 charities each year and helped an estimated 2.5 million people.

For more information about The Movement Centre, call 01691 404248, visit www.the-movement-centre.co.uk  or email curtis@themovementcentre.co.uk 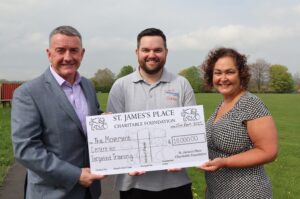