After three years away, Oswestry Community Games more than lived up to organisers’ expectations and a large crowd of people of all ages turned up to enjoy the free activities in Cae Glas Park provided by diverse local organisations covering sports and dance. The live music was provided by The Mirrors, a local group and was much enjoyed.

The sunshine was a huge bonus, and encouraged around a thousand people of all ages to turn up and get involved.

James Manford – Lead Organiser said “In my first year in this position, it has been quite a learning curve bringing everyone together today! Many thanks go to all our local sponsors – Oswestry Town Council, Oswestry BID, Oswestry Sports Forum, Mary Hignett Bequest Fund and Shropshire Rural Housing Association. Thank you to all the clubs and visitors who have given their time so willingly, to David Osselton from Oswestry Photographic Society for undertaking his role, and to Sue Cameron Head Park keeper and her team for making the park look so attractive. Last but not least my thanks go to my Working group, Stuart Manford, Kelly Clarke and Clive Knight, who worked tirelessly throughout the year to help make this great event happen again”.

Shropshire‘s Joe Lockley – our Guest of Honour, from Bright Star Boxing Club, Shifnal who was in the boxing ring with Anthony Joshua in 2019, threw himself enthusiastically into his role trying out a range of activities that he had not had a go at before, and talked to many people of all ages during the course of the day. James Manford our lead organiser was also in fine form as our MC for the day.

Of particular interest in the park apart from “Have a go” sessions provided by our local sports clubs was the performance arena as well as the opportunity to see the rickshaw provided by Shropshire Cycle Hub, and have a ride in it around the town centre.

Many thanks to our Ambassadors from Moreton Hall who worked hard throughout the day, and played a key role in helping with the running of the Games. They oversaw the raffle and charity boxes in support of Joe’s chosen charity “Climbing Out” which helps people recover from mental health issues through providing physical activities for them.

At the closing ceremony, Oswestry Town Council Mayor Jay Moore thanked everyone for their support, and spoke about his work to support our local youngsters in his year in office and his Community Champion Award scheme.  He invited Kelly to join him in the Council chamber to receive this award.   Kelly Clarke is one of our Community Games key organisers and long-term fundraiser for the Movement Centre including her most recently accomplishment of her “dawn to dusk” walk round Lake Vyrnwy completing 51 miles in 16 hours.

Joe Lockley – Guest of Honour – then made an inspiring speech about his work around boxing and mental health being “the best you can be” and that when you get knocked down, you get up again, whatever the obstacles. Border Counties School of Gymnastics then provided their spectacular finale to close the Games. 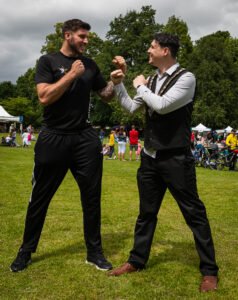 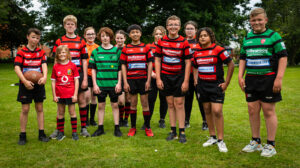 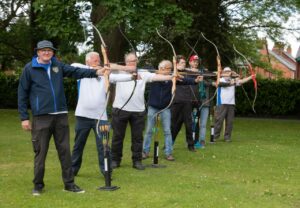