Previous Next
Oswestry company sponsors ‘Advent for Others’ advent calendar

An award-winning Oswestry business known for its charitable work in the community has given its support to not one, but 24 separate local charities this Christmas.

Aico, the fire-safety experts, are long-term supporters of other local businesses, events and organisations, as well as establishing their own Corporate Social Responsibility initiative – Aico in the Community. This year, they have sponsored the Advent for Others advent calendar which will fund and raise awareness of a wide variety of Shropshire charities.

Advent for Others was created by the fundraising team at Lingen Davies Cancer Fund, which supports people going through cancer in the community. The collaborative project also showcases the work of the Ironbridge Gorge Museum Trust, Shropshire Wildlife Trust, Signal, and the Harry Johnson Trust, among many others.

By purchasing a physical calendar, people will not just be supporting one charity, but helping to boost fundraising and awareness for all 24.

Lizzy Coleman, from Lingen Davies, was inspired to create Advent for Others after seeing an increase in the number of people wanting to support charities over the last 18 months.

“The idea for this advent calendar stems from people wanting to support multiple charities. Instead of donating to just one cause, by purchasing this calendar, people can support 24 different causes in the county, and the many hundreds and thousands of people that benefit from their work.

“On behalf of all the charities I would like to say a big thank you to the team at Aico for their brilliant support.”

Neal Hooper, MD of Aico, said he was proud to be involved with Advent for Others.

“The charities involved represent the wide diversity of causes that are supported in Shropshire – all of which benefit local people in and around our community,” he added.

Advent for Others costs £24.95 and will be available to purchase online at www.adventforothers.squarespace.com or from local shops around the county. 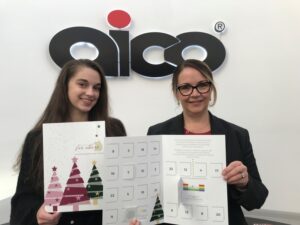