A resident of Oswestry for 20 years, Councillor Moore was elected in 2017 and will be the youngest person appointed to the role of Mayor.

Councillor Moore said  “It was never my goal to be a councillor, so to find myself in line to become the next Mayor of our town was a surprise to say the least. I will be the first Mayor under the age of 40 in several hundred years, and I would guess likely the first ever fire-breather, drummer, and pro-wrestler to boot. It is my goal to be a modern day Mayor, to get some fundraising done and have a blast doing it. Exciting times are ahead, and I can’t wait to meet as many people as possible whilst out in town performing my civic duties.”

Jay lives in Oswestry with his partner Poppy and son Alfie and teaches drums in 7 schools in the county at both primary and secondary level. He is a qualified youth worker.

He has been involved in many projects, from music and charity events to being the founder of Fusion Arts Oswestry, a youth provision Community Interest Company that for several years was the primary provider for youth work in Oswestry and the surrounding areas.

“This is what really lead me to where I find myself now. Following cuts to funding I decided to pursue a role in politics, with a hope to make a change to the repeated cuts that were dismantling youth work in the area. I was successful in my campaign and became an Oswestry Town Councillor for the first time in May of 2017. In my first term I was the driving force behind pushing for improvements to funding for our young people, and we managed to secure an annual budget of over £30,000 solely for that purpose. It was my first taste of seeing some real positive change come from my new role, and ever since I’ve been working towards bringing new amenities and services to our town. Whether it be a return to a large live music event in our town park, a splash pad, skate park or improvements to our way of life, I have always tried to either bring new ideas or lend support wherever possible.” 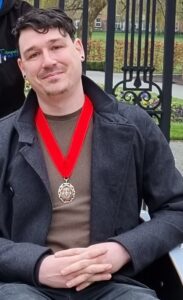