Oswestry Museum are aiming to organise the first annual towns costumed torch light procession to the towns Bonfire site at Brogyntyn Park beside the Oswestry Fire Station on Saturday 5th November. The flaming costumed torch bearers and their marshals will be known as the Oswestry Bonfire Society – Bonfire Society being the traditional title used down history for the organisation. Although happening on the same night as the bonfire organised by Oswestry Borderland Rotary and the Town Council – this is a separate organisation as an additional attraction for the town to encourage local residents and visitors to attend an organised display on “firework night”.

A Bonfire Society celebrates the downfall of Guy Fawkes and his plot to blow up Parliament and King James 1st on 5th November 1605. That is why bonfires burn an effigy of Guy Fawkes, the bonfire came about because if Guy Fawkes had succeeded, his conspirators were to light bonfires all over the country to symbolise the death of the King. Fireworks are used to symbolise the blowing-up of the Houses of Parliament. Costume adds to the celebration, making it more enjoyable for spectators. All the societies have a different costume. Sussex has the most Bonfire Societies but over the years they have spread north, west and east around England and are a very popular spectacle for the onlookers.

Organised by Mike Lade and Mark Hignett through the auspices of the Oswestry Musuem – history will be created. Mike Lade said, “We are looking to assess the interest of the residents in this venture before we can move to the next stage in getting the costumed fire torch procession to reality ready for 5th November.
We want about thirty torch bearers plus marshals and other helpers. To gather the responses, we have a registration button on our web site at www.oswestrybonfiresociety.co.uk and on our Facebook page #oswestrybonfiresociety where people over the age of 18 can indicate their interest as well as how they would like to participate”. 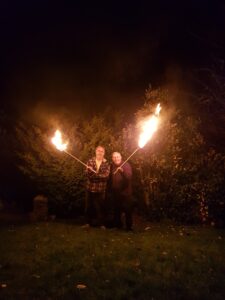 Pictured: Mark Hignett and Mike Lade testing out the torches.