Brynhafod Playing Field in Oswestry, is to install a Queen Elizabeth II Jubilee plaque, commemorating their status as a Field In Trust.

The plaque will be installed on the canopy in the field, which was designed and donated by the British Ironwork Centre, which sits over the Oswestry Boys High School memorial stone.

Once the High Schools sports ground, Brynhafod Playing Field now joins 2800 other green spaces protected under the Field In Trust scheme. Having began in 1925 by King George VI, the scheme has been protecting the UK’s parks and green spaces for 94 years.

With the canopy in a pivotal location, the memorial stone that it sits upon bears the names of 35 soldiers who died whilst serving in World War II. The British Ironwork Centre also plan on installing the plaque in the coming weeks, to support the playing field in receiving the recognition it deserves. 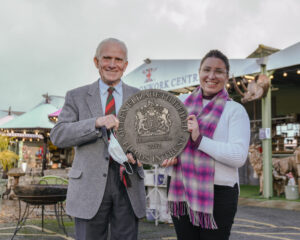