Oswestry’s Charity Market returns and MusicMOB invites you to visit!

Previous Next
Oswestry’s Charity Market returns and MusicMOB invites you to visit!

After an absence of 9 months, Oswestry’s Charity Market will be at the Bailey Head from 9am on Friday 4th June.  Amongst other fabulous charities, Music MOB will ready and willing to provide information about its local activities and its plans to enhance music provision in local State Schools.

Music MOB (Music Matters in Oswestry and the Borderland) is the brainchild of former Town Councillor and business owner, Mike Coppock, who is on the Committee for the Oswestry Youth Music Festival.  Mike could not help noticing that the proportion of entries in the festival from children in local State Schools was diminishing year on year.  The aim of Music MOB is to support free instrumental and vocal lessons for children whose families may not have the means to provide them. Although the lessons would take place in school, there will be no cost to schools or families for either the teaching or the instrument hence removing the potential financial barrier from a child’s choice to learn an instrument or have singing lessons

Oswestry’s Charity Market was developed in conjunction with the Qube with the intention of giving local charities the chance to have a space free of charge to raise much needed funds, find volunteers and raise awareness and first took place in 2018.  This year’s event will comprise 18 stalls and include charities such as Horatio’s Garden, Hectors Greyhound rescue, Whittington Community Centre, Marie Curie, Remap, Oswestry Men’s Shed, The Movement Centre, Hearing Dogs for the Deaf, Severn Hospice, Katmandu, Oswestry Museum, Cambrian Railway Trust, Oswestry Multiple Sclerosis and Evastore who have teamed up with Oswestry Borderland Rotary to raise funds for various local community projects, including a plan to plant native Spring bulbs in various community spaces around Eastern Oswestry in the autumn to enhance people’s self-esteem, well-being and mental health with a multi coloured Spring flower display in public grassed areas.  The Evastore document shredding van will be alongside the Guildhall and for a donation of £5 (for up to 10kilos of paperwork), local people/businesses can have their paperwork/documents securely professionally shredded!  All shredded documents go to Kimberley Clark to be converted into tissue paper!

Come along to the Market and find out how you can help MusicMOB and all the other marvellous charities who will be there. 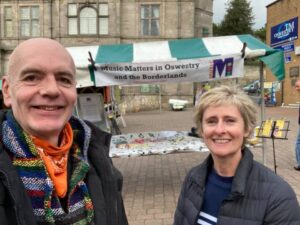