Pumpkins take to the skies over Ellesmere

Previous Next
Pumpkins take to the skies over Ellesmere

More than 40 pumpkins, a medieval siege engine and a team of enthusiastic flingers made the most of the remains of Halloween in an unusual community event in Ellesmere.

Visitors were asked to bring their Halloween pumpkin lanterns, give them a name and then see them flung into the skies in a competition to see whose pumpkin could travel the furthest.  The fling took place at the Birch Road recreation field on Sunday.

Fizzgigs member Peter Cartlidge, who designed and made the trebuchet, said it was a day of hard work but great fun.

“Vital to the success of the trebuchet are about five hundred kilos of ballast and enough strong people to pull the contraption back into position for each fling.

“We were lucky to have two young strong men from Chorley who had heard about us and wanted to join in the fun,” he said. One of these volunteer flingers, Adam Harvey, said: “Who wouldn’t want to throw stuff out of a trebuchet?”

Over forty pumpkins of a range of weights and sizes were flung through the afternoon and some visitors wore special costumes for the event.

Esther Davis, aged five, sported a witch’s hat. “Mine might not go the furthest because it’s huge,” she said.

It was a real family affair with some siblings each bringing their own pumpkin. Lola, aged five, and Lexi, seven, from Lower Hordley had a pumpkin each. Lola’s pumpkin, named Tom, held first place in the competition for some time travelling over 72 metres.

There were many inventive names, including Lord Reith, the last pumpkin to be thrown, Wolfie and Shapeshifter.

The greatest distance achieved was by Warty McWart Face, contributed by Adam Harvey which travelled just under 80 metres. A variety of targets had been set up, including a large Jester and two medieval knights wielding a sword and a mace.

All pumpkin flesh and unflung Halloween lanterns were collected from the field and taken for composting. 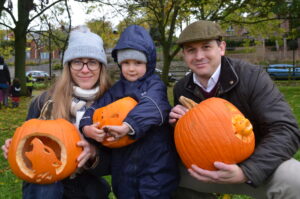 Some unusual lantern carving on display. 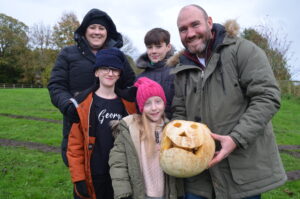 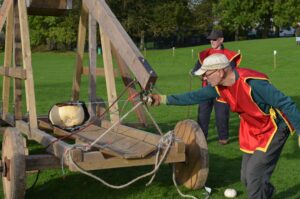