RJAH celebrate staff at virtual awards event with a difference

The past 18 months have been like no other for the NHS – and that has certainly been no different at Oswestry’s specialist orthopaedic hospital.

Now the hard work and dedication of staff at The Robert Jones and Agnes Hunt Orthopaedic Hospital has been recognised and celebrated with the presentation of the organisation’s Celebration of Achievement Awards.

Usually, staff and volunteers would be celebrating at the annual Celebration of Achievement Awards, however the community prevalence of coronavirus meant that this event could not go ahead.

Instead, the Oswestry-based hospital teamed up with Shrewsbury-based events company Yarrington to hold a virtual live ceremony where staff – both those at home and those on shift – were able to tune in and watch the event unfold throughout the night.

A total of 17 awards were presented to individuals and teams during the virtual ceremony which was compered by local Master of Ceremonies and BBC Radio Shropshire presenter Carl Jones.

Stacey Keegan, Interim Chief Executive, said: “It was fantastic to be able to celebrate our staff across the hospital for all their hard work over the past 18 months or so, albeit in a creative and fun way.

“We have fantastic staff here at RJAH, working in both clinical and non-clinical roles, who are making a massive difference to the lives of patients and colleagues daily, and last night was our chance to say thank you.

“The last 20 months or so have been like no other in the history of the NHS, but throughout it all, our staff have stepped up to the plate. They deserve to be recognised and thanked, which is why I was so pleased that we were able to run an awards event like this.

“I’d also like to thank Yarrington and Carl for supporting us to put on a virtual awards ceremony with a real ‘wow’ factor.”

Other prizes included the Covid Recognition Award – a new award for 2021 – which was presented to the RJAH Vaccination Centre, while Amanda Peet, Theatre Operational Manager, was presented with the Chief Executive’s Award for Inspirational Leadership.

The Mary Powell Nurse of the Year Award – named in honour of a legendary former matron at the hospital – was presented to Ann Bishop, Spinal Specialist Nurse. The Sir Robert Jones Doctor of the Year Award went to Mr Cormac Kelly, Consultant Orthopaedic Surgeon.

Anyone who would like to catch-up on the event can do so by clicking here. 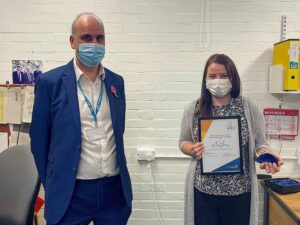 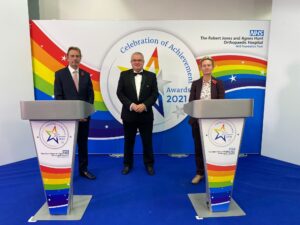