It’s 100 years to the day since Oswestry’s specialist orthopaedic hospital relocated to its famous Gobowen base and the anniversary is being marked by a special burial ceremony of a time capsule.

It came after they secured funding to move from their original site in Baschurch, which had been known as the Shropshire Surgical Home and Auxiliary Military Orthopaedic Hospital.

The League of Friends, with support from Marie Carter, the Trust’s Archive Officer, pulled together the contents of the capsule.

Victoria Sugden, League of Friends Charity Director, said: “It felt right to do everything possible to make the hospitals 100th anniversary on this site as special as we could, despite restrictions and reflecting on what has been the most unusual of times.

“RJAH is a family hospital, and we hope that in burying this time capsule we will leave something of interest to our children and grandchildren. Who knows they might be working at the hospital in 50 years’ time when it is opened!

“I would like to say a big thank you to Marie for her help and support with this project, and the rest of our 100-year anniversary plans. She has been a key part in our celebrations.”

A huge variety of things were included in the capsule, such as photos from over the past 100 years, video messages from current members of staff, and newspaper cuttings.

A brick that was used to build the original hospital site in Baschurch has also been sourced for the time capsule.

Lady Sally Kenyon, League of Friends President, was in attendance and said: “Coincidently the League also has a special birthday this year and celebrates 60 years of support for this very special hospital. It is lovely to mark this special occasion in such a unique way.”

The time capsule has been buried on the field, located behind the Oswestry-based hospital, with a dedicated plaque asking that it’s dug up again in 50 years’ time.

Stacey Keegan, Interim Chief Executive, said: “Burying a time capsule is a first for us at RJAH but our 100th anniversary is the perfect time to reflect on the past, present and future.

“The challenges we have faced are well documented in the capsule, including the coronavirus pandemic which has dominated our lives for the past 18 months, but this ceremony is an opportunity to celebrate all that we have achieved over the past century.” 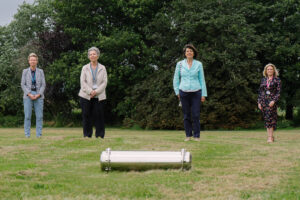 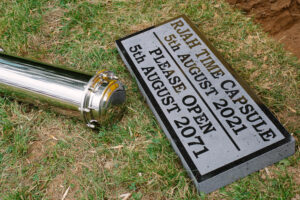