Ellesmere Rotary held a Presentation Evening at The Trotting Mare on Wednesday 19th October to thank all the helpers who did so much to make their July Bell Boat Regatta such a great success. President, Derek Clifford, welcomed the District Governor (DG), Steve Anthill and members of neighbouring Rotary Clubs – Oswestry and Borderlands and Oswestry Cambrian – who assisted along with members of Inner Space Diving Club, Ellesmere Carnival, and Ellesmere Scouts.

He also mentioned the hard work of many other individual volunteers, both Rotarians and others. In particular he thanked long-time supporters Mike and Sheila Dawson of Chester Scouts, who not only arranged the loan of the Bell Boats, but spent their Sunday fitting buoyancy aids to competitors. Town Clerk, Jo Butterworth spent some of her day doing the same, whilst Mayor Anne Wignall drew the raffle. A special mention went to Geoff Corfield, Chair of the Regatta Committee, who picked up the reins again after the two-year Covid gap and launched Ellesmere’s summer events calendar so successfully. DG Steve said, “Coming to the Ellesmere Regatta is the first event of the Rotary year for a new District 1210 Governor, and what a great way to get started. The Town of Ellesmere is an exemplar of community spirit, and the day reminded me of why I became a Rotarian – have fun while helping others.”

Helping others was very much the theme of the evening as President Derek was able to divide the proceeds of the Regatta between two local charities, with £2,500 going to the Lyneal Trust, collected by Chris Symes and the same amount to The Movement Centre, collected by Curtis Langley. Chris said that the trust has been able to offer holiday breaks to some 2000 disabled people and their carers in the last year, either on their specially adapted canal boats or in the chalet facilities. The facilities are constantly being added to and enhanced, and the award will be a great help in continuing this work. Curtis said that the Gobowen Movement Centre, which provides targeted training for children having difficulty in gaining movement control, is financed entirely by donations. This requires constant fund raising, but as a result of the generosity of communities such as Ellesmere he was delighted to say that in the future no parent will have to part fund the treatment given to their child at The Centre. Additional donations were made to Ellesmere Scouts, collected by Bob McBride, and Inner Space Diving Club, collected by Steve Ferrington.

Ellesmere Rotary announced that their Tree of Light Appeal will be launched at the Ellesmere Winter Festival on Friday 25th November, with the proceeds to be divided between Ellesmere Scouts and The Ellesmere Project for Sharing Food and Warm Clothes, which is to be launched at Our Space this Autumn. 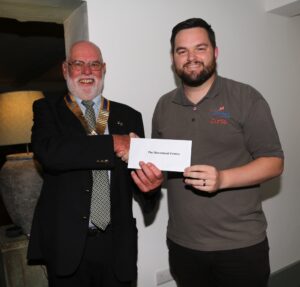