Previous Next
Save Children’s Music!

A local music charity invites you to join their celebration!  After various disappointing postponements due to the pandemic Music MOB is finally able to present a major concert to celebrate its launch.

Major local musical groups will be performing including the two Porthywaen Silver Bands, the Orthopaedic Male Voice Choir, rock band, the Axe Lads and local children’s choir, the Clefhangers.  A wind band has also been formed comprising children from local schools, along with some of Music MOB’s very early learners which will doubtless be a highlight!  This exciting event takes place at the Marches School at 7.30pm on Saturday 18th June.

Music MOB was formed to ensure that music continues to be a choice local children can make regardless of their financial situation.  Since starting instrumental and vocal lessons in October 2021 Music MOB is now teaching 66 children in 3 local primary schools.  And everything is free to the children, parents and schools.

Along with the music tuition children have been involved in other local musical events. Trustee, Sue Turner, formed choirs in our 3 partner schools through Music MOB and on 8th May they took part in the Song for Ukraine concert at Holy Trinity Church. Each choir performed their own individual item and then took part in a massed item with 200 students from other schools in the town where they sang The World in Union. It was a spectacular evening.

The charity’s young string players were treated to a free concert by the Whittington Festival Players, a group of professional musicians who visit Whittington every year for a series of chamber concerts. The children heard string music by Britten and Boccherini, as well as a special rendition of Alan Ridout’s Ferdinand the Bull. It came as something of a shock for them to learn that the professionals practise for 4-6 hours a day!

Music is everywhere; it’s part of our everyday lives and we all take it for granted. The intention is to grow the service and offer music tuition to many more children in many more schools.  The  charity has now been invited to form choirs in some of its partner schools and a recorder ensemble is also shortly due to strt.

The charity continues to be supported by donations of unwanted instruments and has also been fortunate to have been in receipt of various individual and larger donations.  The charity’s work relies heavily on the generosity of donors whose support helps to improve music opportunities for local children. There is a JustGiving page on the charity’s website www.musicmob.co.uk should you wish to support.

Music MOB is a team of committed local music makers and its Board of Trustees includes Sue Turner, organiser of Oswestry Youth Music Festival and a respected peripatetic instrumental and vocal teacher.  The Charity plans that the scheme will begin in two local primary schools in September 2021.

In years gone by, visiting musicians (peripatetic teachers) were a common sight in schools, offering lessons on a variety of instruments.  Many of will have had a first experience of learning an instrument and then playing it alongside other people in a band or orchestra in the state school environment.  Similarly with choirs in school which is another disappearing opportunity.  These opportunities are no longer a common feature and Mike Coppock along with a small group of like-minded people have determined to provide the funds to make this possible once again in our local State Schools.

There are children in Oswestry who have benefited from instrumental or vocal lessons from families who have been able to fund their lessons in school and they have said,

“Music is very important in my life – it is relaxing, interesting and makes me feel as though I am really achieving something”

“If I am ever having a bad day, my music lessons put a smile on my face”

There is of course plenty of academic and empirical evidence to show that children who learn an instrument or have vocal training benefit both academically and socially. Cognitive development is improved, and music making can also boost mental health, develop teamwork and improve listening skills and multi-tasking. Here are some examples of research which demonstrate the positive outcomes.

University of Montreal – musical training can change brain structure and function for the better. Long term memory is improved and children become more mentally alert. They also demonstrate better handling of multi-sensory information. Starting younger drastically improves all of this

University of Zurich – children become more self-disciplined, attentive, can plan more effectively, interpret the emotions of others and find it easier to pick up new languages 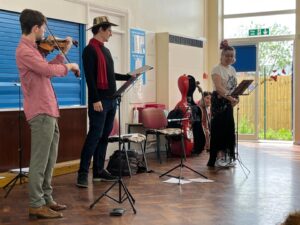 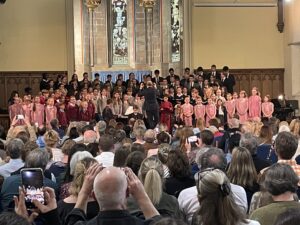 The massed choirs at ‘Songs for Ukraine’ on 8th May. 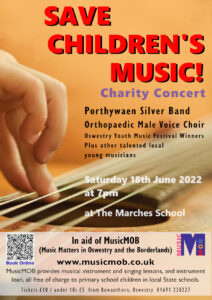