Pupils from Woodside Primary School, alongside community volunteers, have planted over 1900 hedging trees as part of the Queen’s Green Canopy project at Gatacre Pavilion. The planting took place this week and was completed over four days.

The Queen’s Green Canopy (QGC) is an initiative that began in May 2021 in honour of the Platinum Jubilee of Queen Elizabeth II in 2022. Following the sad passing of her Majesty Queen Elizabeth, his Majesty the King, became the Patron and in accordance with his wishes, the initiative has been extended to the end of March 2023.

Oswestry Town Council is proud to be supporting this initiative and thanks all the pupils and partners for their involvement in four days of dedicated planting.

This project is supported by Oswestry Town Council and the Woodland Trust and forms part of the Town Council’s ambitions to plant 17,000 trees, one for each resident in Oswestry. Every school pupil from Woodside Primary School had the experience of planting a tree, providing learning, early guardianship, biodiversity and a reduction of the town’s carbon footprint.

Cae Glas Cricket Club opened up the Pavilion for volunteers during the four days, with key members dedicating time to support the project throughout the week. North Shropshire College also took part with over thirty Foundational Studies students from the Oswestry Campus offering their help. Other partners included Oswestry in Bloom and some tiny tree planters from the local nursery, who came with their own trowels to have some outdoor fun.

This week The Marches School also held a tree planting event which has seen a further 600-1000 trees being planted in the school’s grounds. This was organised by Dr Renwick, in conjunction with Shropshire Council’s Community Tree Scheme, Defra’s Trees Outside Project and Woodland Trust.

Shropshire Wildlife Trust provided important outdoor classroom lessons through CPRE’s Hedgerow Project and were thanked on both sites for providing and loaning spades and gloves to enable the planting.

Deputy Shropshire Lieutenant Veronica Lillis said, “The Queen’s Green Canopy has inspired over a million trees to be planted during its first planting season, creating a living legacy. The extension of the QGC initiative will build on this legacy and serve as a lasting tribute to Her Majesty’s extraordinary service for her country and her people. It was fantastic to be on site and watch young people contributing the QGC right here in Oswestry”.

The Mayor of Oswestry – Cllr Jay Moore said, “It has been wonderful to witness young people participating in wider tree planting projects, and we thank them for their hard work this week, along with some very dedicated members of the public and community partners. Our contribution to planting trees in Oswestry along with the Queen’s Green Canopy would not have been possible without them.”

The Head at Woodside Primary School said, “The children have thoroughly enjoyed being part of this project. It has provided them with an opportunity for outside learning and enabled them to contribute to a community activity – all right on their doorstep. The children are now young guardians of their trees, and it provides a sense of ownership and responsibility of their neighbouring environment. The children have been out in all weather this week and we are proud of what the young people have achieved.” 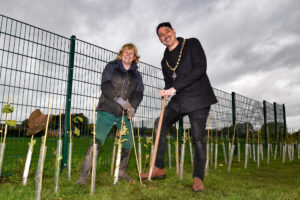 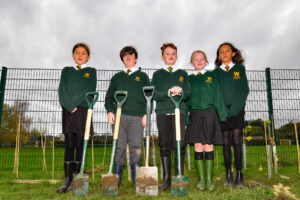 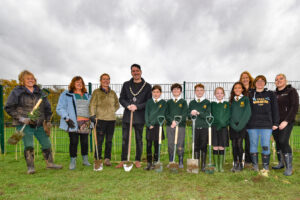 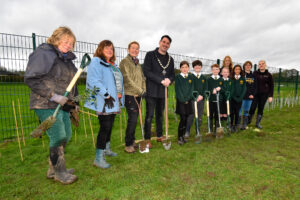 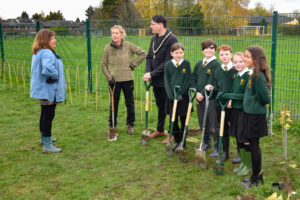 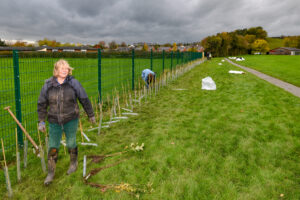