The British Ironwork Centre in Oswestry has launched a crisis appeal to collect medical supplies to aid the people of Ukraine, which is now supported by the Shropshire Chamber of Commerce.

Two of the county’s top institutions answer the global crisis call as Richard Sheehan, Chief Executive of the Shropshire Chamber of Commerce, met with Clive Knowles, chairman of the British Ironwork Centre, to discuss urgent medical needs for Ukraine.

Following a successful previous campaign to collect donations from the British Ironwork Centre’s 200,000 members, where an artic vehicle was filled and sent to Poland and Ukraine, the Ironworks wanted to broaden their communication channels by reaching out to Shropshire businesses – this time concentrating specifically on collecting medical supplies.

With a vast number of Ukrainians staying in the country to resist Russian aggression, it is essential that the world answers Ukraine’s need for medical supplies and takes immediate action.

The centre will be receiving donations 24 hours a day until 24 March, and the aim is to fill a long wheelbase transit that will be driven direct to Poland’s eastern border with Ukraine.

Clive Knowles, chairman of the British Ironwork Centre, says, “these supplies are critically needed, and it simply requires us all to offer our greatest efforts to assist, in the fastest way possible. The Shropshire Chamber of Commerce is without a doubt one of Shropshire’s most highly regarded organisations and having their support is incredibly important.”

He continues, “I’m deeply indebted to Richard and his team for stepping forward and reacting so quickly, I feel blessed to have the chamber onboard”. 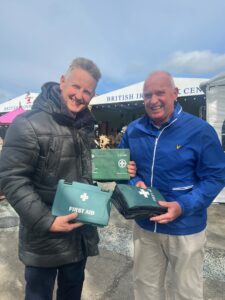