Previous Next
Silly flinging of pumpkins

Peter Cartlidge, Fizzgigs member, came up with the idea for the siege engine, and it has been wheeled out for an outdoor theatrical event as well as each of the Flings since 2019. Ellesmere lad Edward Reincke who had come with a home-made medieval shield to protect himself from flying pumpkins said, ‘It’s silly, but that’s what it’s all about.’

Fifty-two pumpkins of an astonishing range of weights and sizes were flung in the afternoon. Five hundred kilos of ballast was in the trebuchet bucket which was pulled into position for every fling. The stalwarts manning the machine for over one and a half hours had been in training all year, claimed compere and Fizzgigs’ Chairman, Ian Andrew before one of the countdowns to a fling.

It was a serious matter as well as fun. Visitors (especially children) named their pumpkins and each throw was recorded. Quirky names included ‘Go Go Ghostly’, ‘Flying Frank’ and ‘Splatty Sam’. Some were very imaginatively crafted, like Darcy Coombe’s ‘Witchface’ which had several embellishments, including a cat and a broomstick.

A new record was achieved by one called Derek at an impressive 85 metres, exceeding last year’s distance of 76 metres. A variety of targets had been set up; none were hit, though the field judge responsible for measuring each fling sometimes had to be quick on his toes to avoid being hit by the missiles. Small, dense ones went the longest. Some of the heaviest just went up in the air and straight down again, or even backwards, e.g an impressively large and soft one called Marshmallow Man

‘We think it’s a fabulous way to give a pumpkin a fitting end by having a glorious final fling from our trebuchet,’ commented Ian Andrew. And the crowd agreed, with the event becoming a highly anticipated one in the town and even attracting visitors from as far away as Northwich, Preston and Derbyshire.

But not all pumpkins got thrown. Several children had become very attached to their pumpkins. At the last minute they pleaded for their gourds to be taken home again. Three-year-old Savannah Krof was one. Her pumpkin called ‘Witchpoo’ left the field safely inside a carrier bag. ‘She doesn’t realise it will be going in the bin!’ joked mum.

All pumpkin flesh and unflung jack-o-lanterns were collected from the field and taken for composting.

Hayley with boys Leon and Ollie, and pumpkins Superbatman, Pump and Monster Crazy. 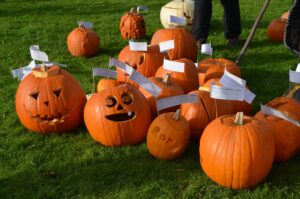