Sporting challenge set to be a runaway success

Previous Next
Sporting challenge set to be a runaway success

An exciting new sporting challenge that gives cycling enthusiasts the chance to complete a 100km tour of the area for a local cancer charity is proving a ‘wheelie-big’ hit.

Almost 100 people have already signed up for Lingen Davies Cancer Fund’s Pedal the Borders event which is being held on Sunday, 25th July. It is being run in conjunction with Adrenaline Sporting Events the team behind the popular Oswestry 10K and the Midnight Ride.

Pedal the Borders was created by Mark Harris – managing director of the Business Company and husband of last year’s Shropshire High Sheriff, Dean Harris. A keen cyclist himself Mark used the sport to help him remain active while going through his own cancer treatment in 2014-2015.

The 100km route will begin and end at headline sponsor, Aico’s state-of-the-art venue in Oswestry and will take in the beautiful scenery of Shropshire and Mid Wales, including Lake Vyrnwy. Entrants are able to sign up individually, or as a team of four, and organisers are hoping as many people as possible can support the feel-good fundraiser.

Lizzy Coleman, Events and Fundraising Officer for the charity, said Pedal the Borders has been really well received and people are keen to get involved with the charity in a sociable challenge.

“It’s just wonderful to be able to organise fundraising events again, and we are so grateful to Mark Harris for having the idea, and to Adrenaline Sporting Events for staging it,” she said.

“We’ve had nearly 100 people sign up so far and there’s room for 150 to take part so we would love to hear from anyone who wants to get involved, cycle this fabulous route, and help make our inaugural Pedal the Borders event a roaring success.

“We’d like to say a big thank you to Aico for being our headline sponsors, and to Craven Dunnill, The Business Company, Rix Petroleum, and Yarrington who are also supporting the event,” she added.

The entry fee includes a training plan, medical cover, bike maintenance cover, on-the-road assistance, British cycling insurance, finishing medal, arrival drink, two food and rest stops along the route, and food and drink at the end of the event. Each rider is asked to commit to raising £1 per KM for Lingen Davies Cancer Fund: the only charity committed to supporting active cancer treatment for people in Shropshire, Telford and Wrekin, and Mid Wales.

Lingen Davies is currently raising money to fund a new CT scanner as well as the creation of three new clinic rooms in the Cancer Centre at the Royal Shrewsbury Hospital.

To sign up for Pedal the Borders visit www.lingendavies.co.uk/event/pedaltheborders 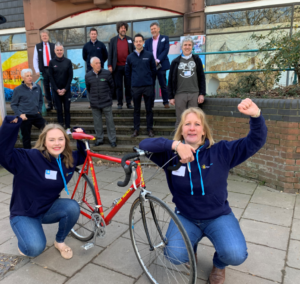