Previous Next
Streets of Santas raise funds for charity

400 festive fun-runners have raised almost £1,400 for a cancer charity – after taking to the streets of Oswestry decked out as the big man himself.

The Shropshire Santa Run was held earlier this month, and was organised by Adrenaline Sporting Events to raise funds for Lingen Davies Cancer Fund which supports patients, their families and the wider community throughout Shropshire and Mid Wales.

Alan Lewis, from Adrenaline Sporting Event, was also behind the charity’s successful summer cycling event, Pedal the Borders, which raised £40,000 for the organisation. He said he was delighted to be supporting the Lingen Davies team again and it was a brilliant sight to see hundreds of people dressed up as Father Christmas taking on the 5km challenge.

“I’m really pleased with how the event went, we have been able to give Lingen Davies £1,391 which is great,” he said.

“We love working with the team at Lingen Davies and wanted to build on the Pedal The Borders relationship and support the charity further. I also have a personal reason for supporting the cancer fund as my Mum had treatment at the Centre,” he added.

Helen Knight, from Lingen Davies, said the support of Adrenaline Sporting Events and other businesses throughout the region is vital to the continued fundraising efforts of the charity.

“A big thank you to Alan and his team, and also to Pentons Haulage, and Town and Country Estate Agents in Oswestry for sponsoring the event.

“We all know that cancer doesn’t discriminate, it affects everybody, we all know someone who has been impacted by it. The hard work and support of our business partners goes a long way to enabling us to carry on our work delivering projects to the wider community, as well as enhancing the treatment of patients in the Lingen Davies Cancer Centre at the Royal Shrewsbury Hospital,” she added.

For more information on the work of the charity, and to support it this Christmas, visit www.lingendavies.co.uk 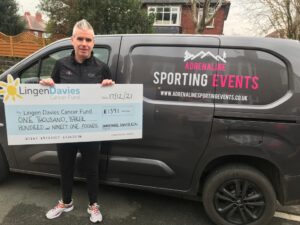