With the help and support of Oswestry Life and the Mayor of Oswestry, Mark Jones, Oswestry Talking Newspaper (OTN) is still being produced.  They now have a number of new assistants on board but will not turn anyone away who is interested in helping.

Current Chairman, John Powell, is resigning for health reasons. However, he is hoping that when he gets his new knees, he will be able to come back on board as a recorder.  John is a founding member of OTN, having been with the charity for forty-four years.

New Chair is Bethan Cross, who is a local, but she has been living in America for some years. She has returned to the UK to be closer to parents, although she does have family still living in the US. Bethan has excellent management skills and has been assisting us in engaging new interest in the charity.

Helen Sharman, the current Honorary Secretary, will be standing down from her role at the AGM in September so we will have a completely new committee running the show. 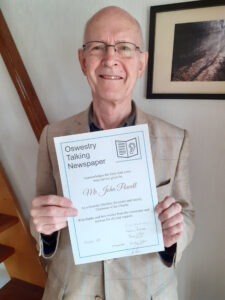