The close of Whittington Music Festival on 22 May left audiences savouring the seven concerts over four days in the picturesque setting of St John the Baptist Church, Whittington. Those who came to all the concerts enjoyed a great variety of music in a programme curated by the Festival’s Artistic Director Sophia Rahman.

Audiences left each concert expressing their enthusiasm for what they had heard. One person who had come to more than one concert even complained hands hurting from so much clapping!

Three evening concerts were accompanied by shorter ‘taster’ concerts on the Thursday and Friday and on Saturday a family concert with young performers with a final concert on the Sunday afternoon.

The Festival was attended by many people from across North Shropshire and further afield who had come to hear music from fifteen musicians with international reputations.

Special features for children included a visit to Whittington CE School and a masterclass on the Saturday where individual young people were given one-to-one tuition by the professionals. Musicians, young players and parents were all so delighted with the masterclass that they can expect it to be repeated next year.

A Festival spokesman said, “It takes us a year to prepare a Festival though the preparations for this year were complicated by the pandemic delaying last year’s Festival which went ahead only days after lockdown restrictions were lifted.

“What makes Whittington Music Festival special is the themed series of concerts by musicians who have performed across Europe and further afield. They spend time in North Shropshire to prepare the programme and we know how much they enjoy their stay in our countryside.

“This year’ s programme was the most varied yet, ranging from the première of a new piece by our Composer in Residence Jeremy Sams – complete with a singing cellist – to the tale of Ferdinand the Bull where local young musicians joined the professionals to tell of Ferdinand who was not the bull-fighting sort of beast.

“We were fortunate too to be joined on the first day by Zoe and Idris Rahman – both with established reputations as jazz musicians – sister and brother of our Artistic Director, who gave a most exciting selection of pieces with roots from as far as Ireland and Bengal!  Nor will many of us have heard before the music of Rebecca Clarke, a British-American composer (who had a German mother!).

“Another treat was to hear the noted tenor Mark Padmore singing song cycles by Schubert and Vaughan Williams.

“Perhaps the only way to appreciate the variety of the programme and the quality of the performances is to have sat through the seven concerts.

“Whittington Music Festival has a reputation for quality and this year has lived up to that. Now the planning starts for next year’s Festival, starting on 18 May 2023. The Festival team will be arranging a programme, engaging musicians and booking the facilities needed to make the Festival happen.

“Most importantly we have to arrange funding. Our ticket prices do not cover the cost of the Festival and we are deeply grateful for the support of the many Friends, Patrons, Benefactors and Sponsors who generously make the Festival possible. Whittington Music Festival is a cultural beacon in North Shropshire, bringing musicians and audience together for music of the highest standard. We are always on the lookout for more support to make sure the Festival can indeed go ahead next year and will be delighted to hear from anyone who can help.” 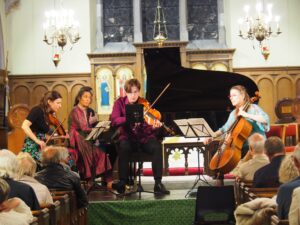