The first meeting of the Shropshire B.O.Ts (Bums on Tums) Stoma Support Group was held on Thursday for the first time since February 2020.

The Group were surprised by a visit from the Mayor, Councillor Mark Jones, Councillor John Price and the Managing Director of Tanat Valley Coaches, Chris Chadd.   Irene Constable Shropshire B.O.Ts said: “The Mayor had been told of the Group by Councillor Price and was keen to meet and talk with us.  Mr Chadd was thanked by the Group for his Company’s generous donation which will be a great help in the coming year.

“There was a good turnout of members and we were also very pleased to welcome five new members, four of whom were new Ostomates who were looking for some support from others who (as one of them said) “were in the same boat as themselves”.

“The itinerary for next year was discussed and many suggestions made.  The next meeting is on Thursday 13th January 2022 at The Memorial Hall, Oswestry at 2pm.” 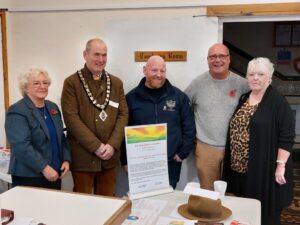