Previous Next
TEXT into Christmas!

Members of Oswestry Rotary Club are counting down the sleeps until the switch on of the lights on their Christmas Tree of Light on Festival (Red) Square outside Square One Cafe at 5:00pm on the 26th November!

They haven’t got long to go now as Oswestry Town Mayor Cllr Mark Jones, accompanied by a choir and band from The Marches Academy, will launch the Club’s 24th Christmas appeal for local charities by switching on the tree lights this coming Friday.

Santa and his elf helper will also be there to meet and greet the crowds, have their photos taken and distribute some small gifts for the younger visitors.

Club President Dave Griggs said: “We invite supporters to donate to our Christmas appeal to support 5 worthwhile local charities; The Midlands Air Ambulance who provide a fantastic service that we all rely upon, Oswestry Young Carers, Severn Hospice, Lingen Davies and the Marches group for the Riding for the Disabled.

“This year we are hoping that supporters will find it easier just to text their donation of £5 by texting TREEOFLIGHT to 70085 from their phone.  Of course, supporters can also download and fill in a form from the Club website, www.rotarycluboswestry.co.uk as always, to donate and make a dedication for a special event.

“To remind donors what to do, we asked Oswestry’s Men In Sheds if they could produce a photo cutout board of Santa bearing the details of how to make a text donation and they have done a fantastic job!

“The cutout will be outside Square One Cafe throughout the appeal for photo opportunities and while visitors have their phones out to grab a photo, we hope that they will text TREEOFLIGHT to 70085 to support our appeal which goes through until Twelfth Night.

“As in previous years, the people of Oswestry have shown their support for this appeal by donating and the business community make the appeal happen by making their own donations in support of this event.

“Let’s make this appeal a great success starting with the switch on this Friday!” 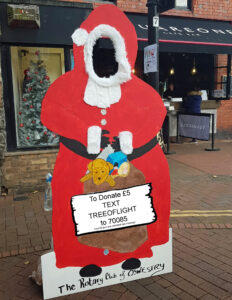 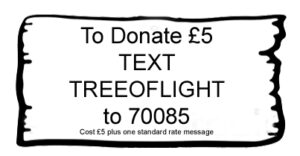 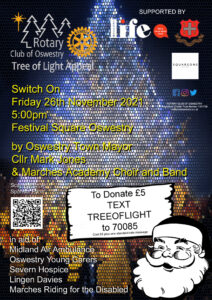