The Bailey Head in Oswestry welcomed the second highest rated brewer in the World to a Meet the Brewer on Wednesday night.

Damian Doherty, the brewer at Emperor’s Brewery in Leicestershire spoke to a packed audience, while three of his beers were available on tap.

Emperor’s Brewery is the second highest rated brewery in the World on the Untappd beer app, which had 9 million users worldwide.

Grace Goodlad, landlady at The Bailey Head said: “It was a great honour to have Damian come and speak to our customers about his brewery and beers, Oswestry is now well and truly on the craft beer map when we can attract a brewer of his calibre to visit and people came from far and wide to meet him.” 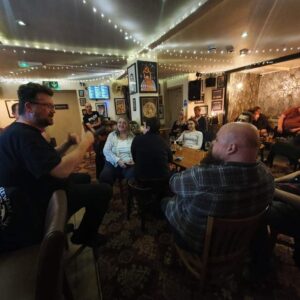