Theatre Show for Older Audience coming to Oswestry and Gobowen

A new theatre performance is preparing to tour Shropshire. including performances in Oswestry and Gobowen.  Arts Alive have joined forces with MediaActive Projects to facilitate the show, which uses words, images and music designed specifically to connect with an older audience. ‘On Your Doorstep’ tells the story of a retired postal worker whose wife has recently passed. He finds a bag of undelivered letters, which reveal the thoughts, feelings and stories from an older generation.

There will be 20 performances of ‘On Your Doorstep’ performed over 3 weeks in local theatres, libraries, and town halls, including locally, Monday 25th October – 10:30am at the Qube in Oswestry and Monday 25 October – 2:30pm at Gobowen Library.

The show has been created using poetry, visuals, music, and stories generated by older people from an initiative called ‘Creative Conversations.’ They held workshops in rural communities in a range of venues, including care settings over a two-year period. The workshops generated a range of art forms, visuals and creative media overseen by professional musicians, storytellers, poets, animators, and artists, to create the content, which has been woven into a one-man performance.

Shropshire based Director – Hannah Prior, designer – Sue Hall, and actor – John Cobb have been devising the 45-minute touring show. John Cobb is an experienced actor and theatre director, who has performed in venues across the globe, including at the National Theatre here in the UK.

Cerin Mills, Live Events Programmer at Arts Alive, has produced the show. She said, “This tour has been delayed by a year due to Covid, so I am thrilled it will finally be enjoyed by a live audience this autumn.

“By working with so many people from local communities to create the content for the show, a really personal, emotive piece of work has been created. We hope it will connect with an older audience, who may have been feeling isolated and lonely during the lockdowns. The show brings together a wealth of stories and creative talent that is often underused and unappreciated.

“We are limiting the audience numbers to create an intimate, exclusive live performance, and crucially, a very safe experience for a more vulnerable demographic.”

After each show the team will clear the set and run a workshop with the audience. They will be asking to hear the audience’s response, to understand the thoughts and feelings it evoked. These responses will be collated and turned in to a book after the tour has finished, which will be an evaluation of how older people are feeling. A film of the production will be available as well.

To find out more about show times and to purchase tickets, please contact the venues directly. More information can be found at www.artsalive.co.uk. 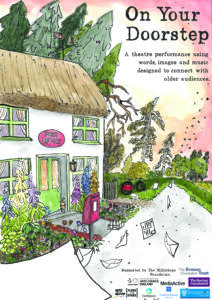