Oswestry Cambrian Rotary are pleased to welcome three new “People of Action” to the team. On a recent summer’s evening, members gathered in the garden of two of its members to induct three new members into the club. President Anna Pugh said, “Although the setting was informal, the new members Stephen, Erika and Michael, all from the same family, we’re formally welcomed into our Rotary club.”

Stephen Walker now lives in Chirk, having moved from Ammanford in South Wales at the end of last year. He was previously a member of Llanelli Rotary and was a very active member and enjoyed supporting the club in a variety of activities, even their 100mile bike ride!!

Outside of Rotary, he runs a business supplying advice and chemicals to assist industries to clean their effluent water before it is discharged from site. This is mostly to the food and drinks industry. He has a degree, Masters and holds a PhD in environmental chemistry.

He is a UK registered athletics coach and coach Special Olympics athletes and still competes in Athletics, mainly in race-walking and supporting son Michael in his attempt to complete the London Marathon in 2021.

Erika Walker MBE was born in Ammanford but spent most of her early life in South Africa.

In 2013 she was awarded an MBE for services to people with disabilities, something she is still very passionate about. She supports Stephen in his work with Special Olympics Athletes and sits on the Welsh organising committee.

She also supports son Michael in his work with his Coalpit Welsh Cake business. Welsh cakes but with a twist. It is hard work, especially if Michael is on TV!!

Son Michael Beynon lives with my mum and stepdad Stephen in Chirk. When in South Wales he would regularly get involved in the local Rotary club activities. He runs his own Welsh-Cake Business called Coalpit Welsh Cakes. This was started when he was thinking of ideas for the local miner’s fortnight. He asked, if the miners took their food down the mines surely it would get black! Hence the company was started. His special Welsh cakes are available at Café Wylfa in Chirk and online.

He is active as an athlete both within MENCAP and the Special Olympics. He became the first person with Downs Syndrome from Wales to complete the Virtual London Marathon in 2020, a feat he hopes to repeat in 2021 in the real London Marathon. He has represented Wales or Great Britain at competitions in Germany, Ireland, Italy and Russia and in 2013, he was fortunate enough to run for Pope Francis in the Vatican Square.

To support Michael in his attempt then please go to the Virgin Money Giving page at https://uk.virginmoneygiving.com/fundraiser-display/showROFundraiserPage?pageId=1249432

The Oswestry Cambrian Rotary is ready to welcome men, women, or couples of 18+ from the local community who want to be “people of action”.  They normally meet at The Wynnstay Hotel, Church Street, Oswestry on Thursday evenings at 7.45pm and meet in the bar. For more information on what their new style of Rotary has to offer contact Mike Lade on 01691 570917, info@oswestrycambrianrc.co.uk or see www.oswestrycambrianrc.co.uk. 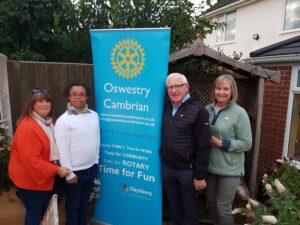