Keen runner Tom Watkin is gearing up for his first marathon in less than three weeks to raise money for an Oswestry charity that supports people with life-changing injuries.

Tom Watkin’s father, Marcus Watkin from Shrewsbury, is a wheelchair user after being paralysed in an accident in 2002 when Tom and his brother George were 7 and 5-years-old.

Tom is running  the Yorkshire marathon to raise funds for the Ethos charity based in Oswestry where his father was a trustee for 14 years.

The registered charity runs three bungalows in Oswestry which provide adapted accommodation and support for people with life changing injury or illness as well as providing help to find a new permanent home to suit each client’s needs.

Tom, 27, who was brought up in Shrewsbury and now works as an acoustic consultant in Leeds, is tackling the Asda Foundation Yorkshire Marathon on October 17.

He first started running when he was working for four years in China as an English language teacher. His first 10k run was on the Great Wall of China and it sparked a love for the sport.

He has completed half marathons including the Leeds Half Marathon in September this year plus an ultra marathon spread over two days but this is his first full marathon.

“The training has been going really well. I have completed a 22.5 mile run and now it’s a case of keeping the mileage up ready for October 17th. I’ve really enjoyed the training and can’t wait for the actual event,” he said.

Tom explained that his family had received huge support after his father’s accident which had helped the family get through a very difficult time. He’s already raised over £1,000 for the Midlands Air Ambulance where his father is a major fundraiser.

“After that I was determined to do my first marathon as soon as I could and raise money for other organisations that help others in the same situation as my dad,” said Tom.

Tom’s father, Marcus said that Tom had had a busy schedule preparing for the marathon. Tom had been running in the mornings before work as well as continuing with his kick box training and moving house.

“The whole family including his mum Ann and brother George are very proud of Tom’s achievements. We’re confident he will enjoy the Yorkshire marathon run and hopefully raise some funds for Ethos Oswestry who I enjoyed supporting as a charity for many years following my spinal injury in 2002 when Tom was only 7-years-old,” he said.

“It is because of the generosity of people like Tom that we can achieve anything at all and a simple thank you doesn’t do his efforts justice. We really do appreciate Tom’s generosity in giving his time,. effort and support to Ethos,” she said. 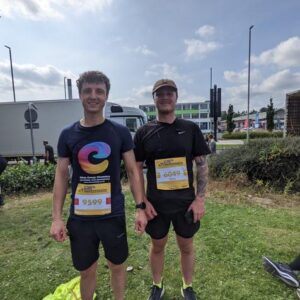 Pictured: Tom Watkin and his flatmate Nick Elms after completing the Leeds Half Marathon.