The Oswestry Town Crier called Borderland Rotarians in for Christmas dinner then surprises two members by announcing that they had won the prestigious Paul Harris Fellowship award.

Members were taken unawares when the Oswestry Town Crier, Phil Brown appeared on the stairs at the Sweeney Hotel and used his outside-voice, inside then, he had a busy night as master of ceremonies and managed to make himself heard above the chatter and mirth.

Borderland President, Cathy Osselton presented the awards to Sherie Soper, a recent president of the club and to one of the founder members, David Kendle. To say that Sherie was surprised would be an understatement and she said, while clutching her certificate, “I have tried to serve Borderland and the principals of Rotary as best I can over the past few years but the last thing I ever expected was to be honoured in this way, I am so very grateful and I thank you all”.

The Paul Harris Fellowship Award is the top Rotary accolade, awarded for distinguished service, above and beyond the norm.  Such is the quality of Borderland Rotary that a third of their number are ranked this high.

Paul Harris founded Rotary over a hundred years ago and since then it has become the largest organisation of service, with a huge impact worldwide.  Despite the massive international connections, the main benefits everywhere are for local communities.  Most people join with a simple idea, to enjoy doing their little bit when they have the time.  All those “little bits” build up to create achievements, and a reputation to be proud of. 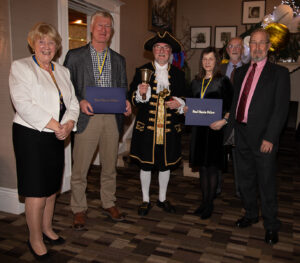