Previous Next
Triumphant return for much loved local pantomime

King Offa and the Dragon is the title of this year’s legendary Rhydycroesau Pantomime after a Covid break of two years, and it was certainly a joyous homecoming as the cast took on this wonderful story, written by members of the team, Brian Smith and Tom Evans.

Chris Bryan-Smith (Borderland Rotary President) said, “It is a very funny take on Celtic, Welsh, Saxon and general border politics and myths from the dark ages, mixed with slapstick, reworded songs and of course, a very large, very red dragon whose voice seems to come from the very earth the characters are squabbling over.

“The lead characters put on a fine show with the bombastic King Offa (Elspeth Carr) obsessing about his turnip diet, and assisted by his noisy henchmen, Bogoffa (Jonathan Jones) and Clearoffa (Julia Walkey), while the Queen (Heather Smith) plots world domination with her Prime Minister, Boris (Demi Williams) who, in a bright yellow suit, bares an almost worrying similarity to another well-known Boris.  Prince Owain (Tom Evans) plays an heroic, brave and principled Welshman, but he is soon smitten by Princess Freya (Bekah Plaisted), a delicate yet outspoken flower who wants peace at all costs and soon falls in love with Owain.  Jones the Sheep  (Harry Jones), a young shepherd plays a blinder and seems to know all the words to all the songs. (No offence meant to other cast members – and I hope, none taken)

“The plan to build Offa’s Dyke will disturb an ancient standing stone beneath which, a mighty Dragon sleeps.  We are all warned at great length by the Druid, (Tony Pepper) who has an ode for every occasion, that this is not a good idea. Luckily, the cast tell him to get to the point but they don’t listen to what he says and the stone is removed to reveal the massive Dragon (Harry & Emily Jones) and his voice is like thunders as he threatens the destruction of all the known world. It is then decided that the dragon should be slain, but who can do this? Step up, with a great flourish, Wulf the Dragon Slayer (Brian Smith) who turns out to be not quite the slayer he thinks he is. It is left to Prince Owain and Princess Freya to promise peace and let the Dragon go back to sleep.  So, an understanding is reached, peace returns to the land, the prince marries the princes and we all sing!  Just a great vibrant, funny show that will appeal to children and grown-ups alike.”

Chris added, “The opening night was a fundraiser for Borderland Rotary and members and friends raised nearly £500 for local good causes. The warmth and simple fun of the show was so refreshing as King Offa tries to take control of Wales with the help of his scheming Queen and inept Prime Minister, Boris and Prince Owain defends the honour and land of his Celtic forefathers and inevitably, falls in love with Princess Freya, the daughter of King Offa and the Queen.  And, of course, there is a massive Dragon to deal with.  The work that goes into these productions is immense and the cast, crew and musicians and everyone involved deserve a resounding round of applause. Just what you need on a cold January evening – just a great show”. 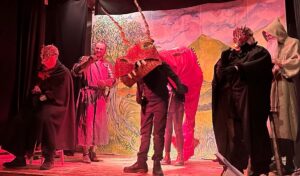 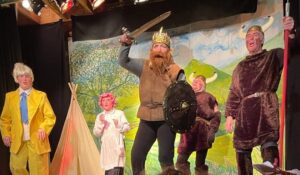 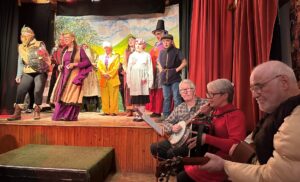 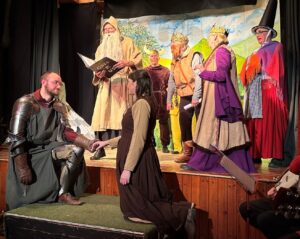 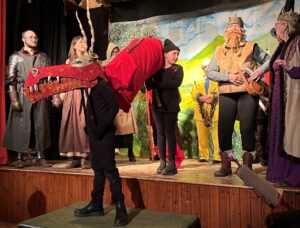 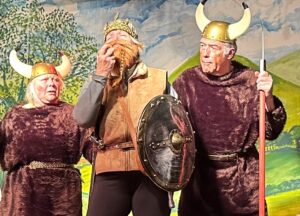