Turner to take up reins as next RJAH Chair

Previous Next
Turner to take up reins as next RJAH Chair

Experienced non-executive director (NED) Harry Turner has been appointed as the next Chair of The Robert Jones and Agnes Hunt Orthopaedic Hospital NHS Foundation Trust.

Harry will take up the reins from 1 February next year, succeeding Frank Collins, who will be stepping down after almost eight years in the role.

The move represents a step-up for Harry, who has been a NED at the Oswestry-based specialist orthopaedic hospital since autumn 2017, more recently as vice chair and Senior Independent Director.

He is already serving as Chair of Dudley Integrated Health and Care NHS Trust, and will continue in that role alongside his new duties.

“RJAH is a fantastic organisation and it has been a privilege to be a part of it over the last few years,” said Harry.

“I am honoured to be given the opportunity to succeed Frank as Chair and look forward to helping the Trust continue to deliver the outstanding levels of care for which it is so well known.

“RJAH is synonymous with great people and great outcomes and I will be focussed on maintaining those high standards, and developing its role further within the Shropshire, Telford & Wrekin Integrated Care System (ICS).

“There is much to do as we look to restore and recover our services fully after the worst effects of the coronavirus pandemic. I am confident that we will do that.”

Outside of the NHS, other senior roles include being Chair of the Hospice Charity Partnership in Birmingham, and Presiding Justice in Worcestershire Courts.

He previously worked at Board level in the hotel industry, working for businesses including Premier Inn and Marriott International.

His appointment has been welcomed by Frank Collins, the man into whose shoes will be stepping.

“I have worked closely with Harry ever since he joined us in 2017, first as a Non-Executive Director and in more recent times as my Deputy Chairman,” said Frank.

“His experience and his commitment to patient care has been hugely valuable – both to the organisation and to me personally.

“I leave with some wonderful memories of my time at RJAH, but I go safe in the knowledge that the Trust will be in safe hands for the next leg of its journey.”

Despite leaving RJAH, Frank will continue to work within the health and care system in Shropshire, Telford & Wrekin for a further couple of months.

“I shall be staying on as a member of the Shropshire, Telford & Wrekin Shadow ICS Board until the end of March 2022 to allow for continuity in the sustainability agenda, and in particular in chairing the ICS Sustainability Committee,” he added. 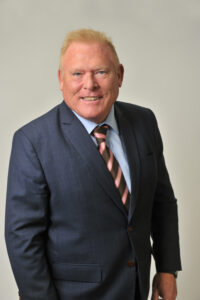