Visitors looking to take the train on the newly opened Cambrian Heritage Railways (CHR) has proved so popular that the railway is looking for additional volunteers to help run the latest tourist attraction in Shropshire.

The railway extension from Oswestry to Weston Wharf was officially reopened on 1st April by Member of Parliament for North Shropshire, Helen Morgan and Shropshire Council Chairman, Vince Hunt. It has since become a very popular attraction for those wishing to travel on the two mile stretch of line.

Volunteers Week from 1 -7 June has come just at the right time for the CHR as it makes a plea for more help to run the railway as General Manager, Andy Green explains: “It has been an immense challenge to restore the railway enabling us once again to carry passengers along part of the original Cambrian line that hasn’t existed for over 50 years.

“I am delighted the public want to visit us and experience our heritage railway. To facilitate the increase in passenger numbers we need more volunteers of all ages and skill levels to come forward and help run the railway. Volunteers jobs are many and varied, from skilled workers on locomotives and rolling stock restoration, building trades and track maintenance. Helpers are also needed in public facing roles to ensure the railway runs smoothly during the operating season”.

If you can help CHR run the railway either everyday or once a month, Cambrian Heritage Railways welcomes you at: www.cambrianrailways.com.

Cambrian Heritage Railways runs steam and diesel heritage trains from Oswestry to Weston Wharf most weekends until September 2022.  It is also planned to run ‘special excursion’ trains linking Oswestry with attractions close to Weston Wharf such as Stonehouse Brewery and Weston Pools Village. 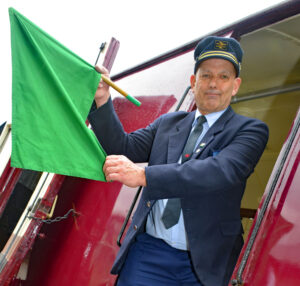