Wedding bells at RJAH for Phil and Shirley

Previous Next
Wedding bells at RJAH for Phil and Shirley

The couple have been together for almost two decades but have had to face the difficult truth that Phil’s illness means their time is running short.

So, determined to make the most of every minute, they opted to get married at The Robert Jones and Agnes Hunt Orthopaedic Hospital, where Phil is an inpatient. Hospital staff pulled out all the stops to give them their special day and create lasting memories.

The couple were married by Reverend Canon Nia Morris from All Saints Church in Newtown, with support from Rev Simon Airey, Hospital Chaplain, in a special ceremony that took place in the Multifaith Chapel at the Oswestry-based hospital.

Phil, 66 from Newtown, was diagnosed with kidney cancer back in 2004, however in 2016 he received a diagnosis that the cancer has spread to his bones. He was recently admitted to hospital where he was then placed on a palliative care pathway.

The couple had a wedding planned for later this month at their church in Newtown, however due to Phil being in hospital, it had been postponed.

They then decided that there was no time like the present to get married, after 19 years together.

Phil said: “We can’t thank all the staff enough for making this happen for us both. Being able to get married was important to both of us and it was a superb day.”

The wedding was also live streamed to America so Shirley’s daughter could be a part of the special day.

Pip Page Davies, Macmillan Specialist Nurse, was involved in organising the ceremony and reception for the couple. She said: “It was a privilege to have been able to help such a special couple get married. It wasn’t only a significant day for Phil and Shirley, but also the hospital.

“Thank you to everyone who supported including the staff on Oswald Ward, our inpatient cancer ward, Porters, Catering Team and League of Friends.”

All the stops were pulled out to make the day as special as possible for the couple, including the Catering Team providing a buffet for the reception, which took place on Montgomery Unit, the bone and soft tissue outpatient unit, as well as the League of Friends and Hobo Florist donating flowers.

Stacey Keegan, Chief Executive, said: “As a hospital, we pride ourselves on providing true holistic care to our patients. When Phil and Shirley explained how important it was for them to get married, we knew we had to go above and beyond to make it happen.

“On behalf of RJAH, I would like to offer our congratulations to the newlyweds.” 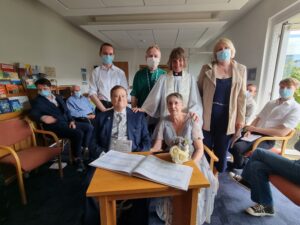 Pictured from left to right, back to front, is: Shirley’s grandson Marcus, who was a witness; Hospital Chaplain Simon Airey; Reverend Canon Nia Morris from All Saints Church in Newton, Shirley’s daughter Maddie, who was a witness; Phil Bryers and Shirley Bryers, formally Astbury, following their ceremony in the hospital’s multifaith room.