Glyndwr University staff and students have been helping prepare Wrexham FC’s new management team and squad for next season – while being filmed for a documentary series.

The footballers visited the university’s Human Performance Lab this week, where under the watchful eye of Glyndwr Sports Scientist Richard Lewis, they were weighed, measured and tested at the start of pre-season.

This testing was captured by the makers of a documentary, which has been filming since the National League Club came under the ownership of Hollywood stars Ryan Reynolds and Rob McElhenney last year.

Helping Richard record the data was student Chris Wallace, who the day before, had learned he would be graduating with a First in his BSc Hons Sport, Health and Performance Science Degree.

Richard said it was a good opportunity for Chris to put what he has learned during his degree to practical use with professional athletes.

He said: “The Wrexham FC first-team have come in with their Fitness Coach for some body composition analysis and to assess their body fat.

“They have come in today to use our Body Composition Analyzer. Myself and one of our students (Chris Wallace) are going to work with them to get their body fat score, and hopefully help the Fitness Coach monitor the players over the pre-season and try and reduce the amount of injuries that occur and make sure the players are in peak physical condition.”

He added: “An important part of studying for an academic Degree is to gain applied experience and we always look to get students involved in any applied consultancy or collaborative work we do with football clubs, sports teams or athletes.

“We were working with Wrexham FC’s youth team yesterday and we’ve got other athletes we are doing testing for as well, but to work with the Wrexham first-team is a bonus for students to gain that hands-on experience and actually apply the testing they are taught on their Degrees at Glyndwr is fantastic.”

Student Chris added: “I found the session really enjoyable and a chance to apply my theoretical knowledge in a more applied nature, especially having the chance to work with professional athletes from a sport that I would not normally be involved in.

“It was really beneficial to see how the work we were completing in this session fits within the multidisciplinary team already in place and hopefully contributes to their training.” 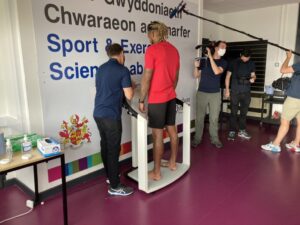 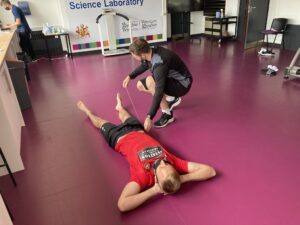