A Wrexham Glyndwr University lecturer is donning her running shoes to help the charity that supported her parents through their battles with cancer.

Abigail Schwarz, Senior Lecturer in Primary Education with QTS at WGU, will run this year’s London Marathon to raise funds for Macmillan Cancer Research in memory of her dad Alec Crann, who passed away in 2019 from oesophageal cancer, aged 69.

While Abi, 38, has run half marathons for good causes before, October 3 will mark her first attempt at a marathon.

The charity not only proved a vital source of information and support for Mr Crann and his family, but was also there for Abi’s mother Mel after her cancer diagnosis. A swimming group organised by Macmillan provided both exercise and a vital support network for Mrs Crann after her treatment.

“It’s not just the immediate person that has the diagnosis that go Macmillan for support but the families as well, she said.

“They’re very good in terms of being very honest in what they tell you about the condition, in a very understanding way.

“They don’t sugar-coat it; it’s delivered in an accessible way – very pragmatic but with understanding.”

Fitting in training around work and family commitments during a global pandemic has been difficult, but Abi is determined to give back to the charity for its help.

She is busy with long runs at the weekend and two shorter runs during the week in preparation for the run and joked: “I have told my students that they will have to come out for lunchtime runs with me!”

Abi, who lives in Coedpoeth but is originally from Bury St. Edmunds in Suffolk, is collecting donations for Macmillan and has launched a sponsor a mile of the marathon in memory of, or in thanks for someone. She will wear a T-shirt bearing those names during the run.

To contribute to Abigail’s fundraising, go to: https://uk.virginmoneygiving.com/AbiSchwarz 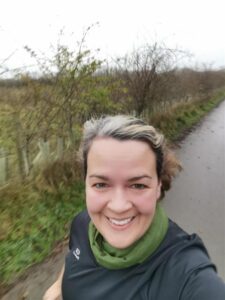