The impact and legacy of four outstanding individuals has been recognised with the awarding of Honorary Fellowships from Wrexham Glyndwr University.

Opening the ceremony, Wrexham Glyndwr Vice-Chancellor Maria Hinfelaar said: “It is a real pleasure to honour four very special people and hear about their achievements and what they mean for our region and our university.”

Recognised for his outstanding contribution to politics and the local area, Ian Lucas, a former solicitor, served as Wrexham’s Member of Parliament for 18 years from 2001 to 2019.

He served in the Labour Government under Gordon Brown, established and chaired the All Party North Wales/Mersey/Dee Group, and joined the House of Commons Digital, Culture, Media and Sport Select Committee – playing a prominent role in widely praised, ground-breaking work on ‘Disinformation and Fake News’.

Ian considers helping to secure university status for Glyndwr in 2008 as one of his finest achievements.

On accepting his Fellowship, he said: “This honour is something that is very special. The university is such a special place and that is why I thought it so important that Wrexham and North East Wales needed a university when I became the MP.

“It’s a university that is making great progress and that makes me very happy.”

Dr Elin Haf Davies is the founder of Aparito, a digital health company based at Wrexham Technology Park which is focused on developing patient centric digital outcomes to support decentralised trials.

Elin has a passion for extreme adventure and raises money for charities close to her heart. In 2007-2008 she rowed across the Atlantic Ocean, raising £190,000 for metabolic research at Great Ormond Street Hospital.

Her charity work and achievements have been acknowledged by the Welsh Parliament with an award for ‘Services to Wales’.

Accepting her Fellowship from Glyndwr for her outstanding contribution to Paediatric Medicine, Elin said: “It is a great honour to see Aparito grow in Wrexham. I am absolutely adamant that education and university is at the root of what is needed to bring innovation and economic benefit to the community.”

David Richards CBE is Chairman of Motorsport UK. He spent eight years as a professional rally driver concluding his competition career by winning the World Rally Championship as co-driver to Ari Vatanen in 1981.

Following this title, David formed his own team and created Prodrive in 1984.

In 2007 David led the consortium that purchased Aston Martin from Ford. He was appointed Chairman, a role he fulfilled until the end of 2013.

Receiving his Fellowship for outstanding services to Motorsport, David said: “I congratulate the University and am thankful for this honour that I very gratefully receive.”

Ponciau-born Brian Hughes is highly regarded and considered to be one of the most important choral composers living in Wales today.

Brian first came to prominence as conductor of the Alun School Singers and the Cynwrig Singers, with both choirs performing regularly on radio and television. He spent 25 years at the Royal Northern College of Music Manchester as chorus master and Head of Opera music staff.

He has a large number of orchestral works to his credit and in 2010 he was awarded the John Edwards Memorial Prize for his contribution to music.

On receiving his Fellowship for outstanding services to choral music and competition, Brian remarked that he was the first person to speak from the platform at the William Aston Hall in a public performance.

He added: “This is a great honour and very much appreciated.” 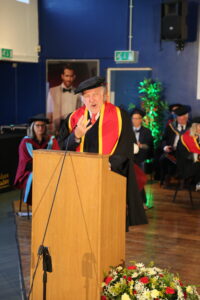 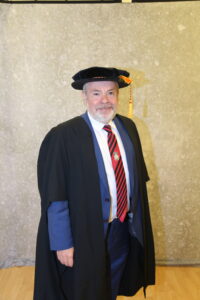 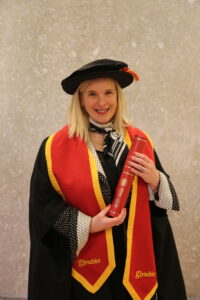 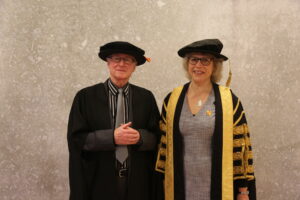