Youngsters at RJAH to benefit from exciting interactive Gaming Carts

From Minecraft Dungeons to FIFA 22 – young patients at The Robert Jones and Agnes Hunt Orthopaedic Hospital (RJAH) will have access to some of the latest Xbox computer games thanks to the donation of two state-of-the-art gaming carts.

The two Xbox Series S carts – which resemble portable gaming systems on wheels – have been supplied by TheRockinR Gaming Charity and with games and controllers included, are worth more than £8,000. One has been funded by the Starlight Children’s Foundation and the other by the hospital’s own League of Friends and RJAH Charity.

They were delivered to Alice Ward, the dedicated children’s ward at the Oswestry-based hospital, by Jess and Jonny Miree from TheRockinR.

“The carts have the latest gaming technology, which will be a welcome distraction for the young patients. We are very grateful here on Alice Ward and we would like to thank TheRockinR, Starlight and the League of Friends for their donations.”

TheRockinR Charity was formed in the memory of Reece Miree, who in March 2018, at aged 11 years old, sadly died due to DIPG brain cancer. Reece’s legacy continues through his love of gaming and the use of his gaming tag, which was ‘TheRockinR’, with the charity having been started by his elder sister Jess and father Jonny.

The carts are supplied in hospital to be used as coping tools for children undergoing treatment, and to promote social interaction on the hospital wards.

The delivery of the interactive gaming carts to RJAH was particularly poignant as it fell on what would have been Reece’s 16th birthday.

Providing children on Alice Ward with the medical gaming carts was a welcome distraction to his family, one which they know would have meant the world to him during his time in hospital.
Jess, from TheRockinR, was quick to connect the gaming carts up for the children. She proudly explained the brand’s colour scheme was chosen as they were Reece’s favourite colours.

She added: “The gaming carts help to reduce the impact of hospitalisation on young patients and their families. We have distributed almost 300 carts nationwide, offering a welcome distraction to treatments and procedures.

“We are delighted to come to RJAH Orthopaedic Hospital with two gaming carts. We hope the children will enjoy using them and it will make their stay in hospital a little less anxious.” 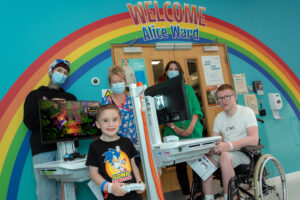 Pictured: With the two new interactive gaming carts are, from left, Jess Miree from TheRockinR; Freddie Evans, aged 5 a patient on Alice Ward; Polly Brown, Health Play Specialist; Heather Thomas-Bache, Head of Fundraising, Communications and Volunteers for the League of Friends; and Joel Phillips aged 16, a patient on Alice Ward.