Do you play an instrument and have always wanted to join a band? Well, the Iftonites Youth Band is a local brass band, part of the Ifton Colliery Band organisation, meaning they progress players from beginners, to more advanced players.  The players that join may have never played an instrument before however, through training and teaching they will learn how to play, how to read musical notation, and basic music theory.  Based at Black Park Chapel in Chirk, near McDonalds, the band attracts members from all over the surrounding areas, including Oswestry and Wrexham.

The band accepts children from 8 years old up and those who want to learn to play.  Whether they have never played before or whether they are experienced players, there is a seat for everybody.  The types of instruments played are Cornets, (these look like trumpets but are smaller), Horns, Euphoniums, Baritones, Basses, Trombones, and Percussion. The band loves to have fun and pride themselves on a welcoming atmosphere whenever they come together.

As a brass band, you may assume they play the typical brass band marches and pieces, but it’s not all traditional. They also love to play modern music.  These pieces could be pop songs, movie soundtracks or instrumental medleys of songs.   Pieces range from being upbeat and joyful, to slow and melodic. So, there’s something for everyone to enjoy playing.

You may wonder how the lockdowns have affected practices. Covid has impacted all brass bands and not being able to play has not only had a detrimental effect on not being able to practise together, but also to their social lives.

Youth Band Music Director Amy McCulloch told us, “Personally, I have played in a brass band since a young age and going from playing with the band twice a week and seeing all my friends to having nothing has left a really big hole.

“There is going to be a big change coming for our Youth Band in the next six months.  The plan is to build up a bigger youth band to give the children of Oswestry and the surrounding areas a place to engage in musical activities.  Having accessibility for music education is so important, especially as there is a huge decline within the Arts industry.    By building up the band, we hope (covid pending) that we will be able to go out and share our music with the community in the form of concerts.”

Scott Lloyd, Music Director for the Senior Band said, “Covid has had a massive impact on our organisation as a whole. The band is a registered charity and is usually self-sustaining from money raised through performances. The senior band adapted really well and they’re making remote online performances shared across Facebook to lift the spirits of anyone who saw them and raise vital funds for the band.   As I have only just been appointed as the Youth Band Musical Director, we are waiting for the 19 May to get back to banding fully.   However, we have been setting some little challenges for our players to keep playing.

“We are really lucky as a band to have co-op local charity funding.   However, with covid we have set up a just-giving account on our Facebook page for the band to keep going.  This can be found on our main Ifton Colliery Facebook page.

The band does usually get involved in a number of events across the year.   The Senior Band compete and play a variety of different concerts and we hear, they will also be releasing a CD soon!   The Iftones are an Oompah Band and they usually play in a variety of different concerts.   The Youth Band have played concerts in the past but are looking forward to the future and hope to make these concerts bigger and better.

If your child is interested in joining the Youth Band you can send an email to iftonitesyouthband@gmail.com or contact the band via a Facebook message @theiftonites. 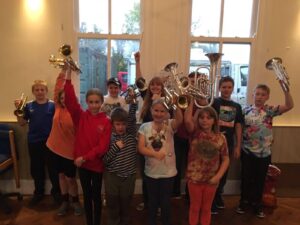