Glyndwr University is pleased to confirm that the transfer of the Racecourse Ground stadium freehold to Wrexham AFC has been completed.

The completion marks the end of the university’s ownership of the stadium which began at a time when the club was in very real danger of going out of existence.

In the summer of 2011 Glyndwr stepped forward in the club’s hour of need as the only viable purchaser of the stadium, enabling the Wrexham Supporters Trust (WST) to concentrate on gaining the ownership of the club itself.

As well as safeguarding the stadium for future generations, the acquisition also provided a top-class facility which provided a range of uses for the university’s students and staff.

With the club now owned by Hollywood stars Ryan Reynolds and Rob McElhenney, and its long-term future secure, the university felt it was the right time to facilitate the club taking ownership of the stadium once again.

Wrexham Glyndwr’s Executive Director of Finance, David Elcock, said: “It was a great honour for us to have been custodians of the oldest international football stadium in the world.

“In 2011, when the university purchased the stadium, it was not only for the benefit of our students and staff, but also the wider community. It was imperative that the football ground was preserved for the people of Wrexham and further afield.

“It was a huge commitment and civic responsibility for us to undertake, but the purchase was crucial in helping to keeping the football club alive during a summer in which the fans raised more than £100,000 in a day just to keep the club in existence.

“Our previous purchase of land alongside Crispin Lane behind the Kop also removed any potential barriers to developing a new stand in the future.

“More than 10 years on it is time for us to hand the stadium back to the club under its new ownership so they can take forward the exciting developments and improvements they have planned.

“From my earliest conversation with Ryan and Rob it was something they were keen to do, and we were happy to help.”

David added: “After the results of the club’s fans survey, in November ‘21, it became particularly clear to us at the university that there was a huge appetite to see the football club own the stadium again and we have been working towards this moment since then.

“I want to say a special thank you to Shaun Harvey and Executive Director Humphrey Ker who have both been incredibly helpful and instrumental in ensuring this transfer went smoothly.

“We continue to work with our neighbours at the football club to enable the delivery of a new Kop stand, and an extension to our student accommodation, as we continue to progress with our Campus 2025 project – investing in the very best facilities for our students and staff. We also remain committed to our role in the Wrexham Gateway Partnership which seeks to further enhance our local community.” 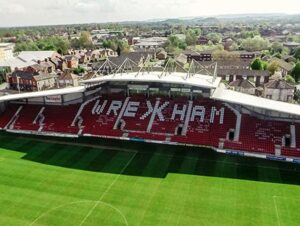