Previous Next
Hope House launches its biggest care fundraising appeal ever – to raise £500,000 in just 36-hours!

A children’s hospice is asking people in Shropshire and Mid Wales to donate like never before as it aims to raise £500,000 in just 36-hours to fund its end of life care for children and families for a whole year.

Their Final Moments Matter campaign will be the charity’s biggest care fundraising appeal ever and will run from 10am on Sunday, November 21 until 10pm on Monday, November 22.

Already local businesses and key supporters have pledged £250,000 of support. This will be used as match funding for every donation made during the 36-hour period. Only if £250,000 is donated by the public will the match funding pledges be completely unlocked and the £500,000 raised.

Fundraising Director Simi Epstein said she really hoped the community would come together as one to embrace local families whose hearts were breaking and to help make sure they were not isolated in their pain and grief.

“At Hope House we know that Final Moments Matter and that the last moments of a child’s life should be as precious as their first,” she said.

“We have been pledged £250,000 of match funding to enable us to reach our goal. But we need your help to unlock that cash.”

The fundraising campaign will be based online, with supporters asked to become ‘Team Leaders’ and spread the word by sharing messages and videos about the work of the hospices by social media, email and WhatsApp to inspire support from the people they know.

One of the families whose story features in a video is the Mullis family from Nesscliffe, Shropshire. Little Arthur was just two-years-old when he died suddenly in hospital. His mum, dad and sisters tell of the help and comfort Hope House gave them in the days and years that followed.

“After he died in hospital, Arthur was brought to Hope House,” said mum Alison. “When we got there he was lying on the bed – he looked asleep and it felt like home. The nurses understood and gave us precious time together.”

Dad Nick agrees: “It has been seven years now since Arthur died but life does move forward and you still have to carry on but your memories are happy ones because you have had the help of Hope House with counselling and being able to say goodbye properly.”

When Evan Williams from Wrexham, North Wales, died suddenly in his sleep weeks before his 13th birthday, his mum Jane said the hospices were there for them.

“Evan had no illness at all. He was fit and healthy and he simply went to bed and died in his sleep,” she said.

“I found him when I went to wake him in the morning. It was a huge shock for us all. I can honestly say if we hadn’t had Hope House I don’t know what we would have done.”

If you would like to get involved in Final Moments Matter either by running a fundraising team or making a donation you can find more information at hopehouse.org.uk/fmm or call the Fundraising Offices on 01691 671 671. You can also follow Hope House’s social media channels to follow the progress of Final Moments Matter. 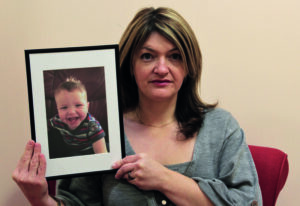 Pictured: Alison Mullis holding a picture of her son Arthur. 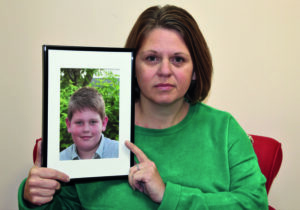 Pictured: Jane Williams, holding a picture of her son Evan.