Bev Davies was immersed in art from an early age as her father, an engineer by trade, had a great love of it, involving teaching and encouraging Bev to have a go with everything from painting through to clay. Bev grew up and went to school in Chester, then went onto Wrexham Art College for a three-year course where she specialised in vocational art and stained glass. This steered her towards a degree course at Wolverhampton University to study 3D glass design, where she specialised in surface decoration on 3-Dimensional blown glass forms.

Bev told us, “On leaving, I was intent on becoming a self-employed glass artist. I met my future husband, Iestyn, who was already a glass artist/glassmaker with his own furnace/studio. After a few years we joined forces professionally and traded together as ‘Blowzone Glass Studio’ in 1993. Over the next few years, we supplied over 500 galleries and department stores all over the world, combining our skills with my interests still firmly rooted in colour and complex patterns. Around 2000, my husband started designing his first LED lighting and more sculptural work, whilst I specialised in raising our two boys, who are now 19 and 24.

“In 2007 we rebranded as the Contemporary Chandelier Contemporary Ltd and committed ourselves to creating lighting rather than art glass. As part of this change, we decided to move to Shropshire, leaving our furnace behind in the Midlands, after 20 years. When the Pandemic took over all our lives I was forced to shield because I was on immune suppressants.

“I noticed the Qube in Oswestry were running an open arts competition, so as a focus and something to work towards, I thought I would enter even though I had not painted in around 30 years.”

Bev’s home in Ellesmere backs onto farmland and periodically cows appear at the bottom of the garden. The cows became her first subjects, which she shared just to friends on social media. Everyone was very encouraging, so a series of paintings followed of a goldfish in a bowl, which represented the isolation she was feeling . Bev had two paintings selected for the gallery which were well enough received for her to be encouraged to do more.

“I met Claire at Oswestry Framing; she gave me such amazing encouragement about my work and  suggested I send my work off to a publishing company called ‘Collier and Dobson’ who publish limited edition prints from selected artists . She also gave me further encouragement to contact a card publisher who have also accepted my work and I now have a range of around 9 art cards. Both the cards and limited-edition prints will be stocked by Oswestry Framing”, Bev said.

“The time arrived to make a pitch to the publishers and just a few weeks later I met with Giles from Collier and Dobson (very socially distanced and masked up, outside the house) and he selected a few paintings to take back to the team, offered further advice and encouragement.

“I have just launched my first five paintings as limited editions of 195 prints and as we come out of Lockdown, I feel a real sense of achievement. I am also just launching a wide range of different animals on a set of beautiful cards produced by Green Pebble and discussing some images on some lampshades. I am actively selling my own originals too, mainly through my website (another new thing, aided by our talented son, Ben). Alternatively, you can see much of my work on my Instagram account @bevdaviesart.

“I feel I have turned a negative into a positive and hopefully the future will continue to unfold, allowing me to continue developing as a professional artist in my own right (while still helping my husband occasionally).”

For stockists and to view Bev’s art, please visit www.bevdaviesart.co.uk 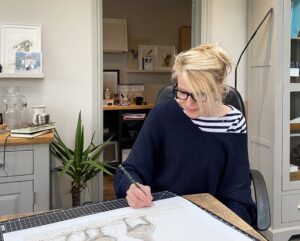 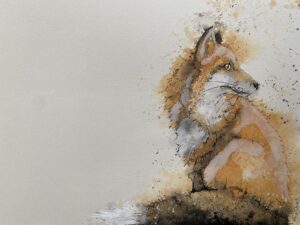 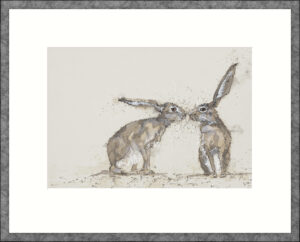