A former Wrexham Glyndwr University footballing student has spoken of his pride at being part of the backroom team during Brentford FC’s rise to the Premier League.

Joe Newton, 25, enrolled at the university in 2014 after his release by Tranmere Rovers at the end of his apprenticeship.

As well as gaining a Sports Science Degree, Joe went on to complete his Master’s at Glyndwr, while undertaking performance analysis work for Welsh Premier League club TNS.

After gaining his Masters, Joe applied for, and was successful in gaining, a Performance Analysis role with Championship club Brentford FC with whom he celebrated promotion to the Premier League at the end of this season, beating Swansea City in the play-off final at Wembley.

Speaking about his football journey, Joe said his time at Glyndwr was pivotal, after joining the Wrexham Glyndwr Academy scheme to give young footballers released by their clubs an education, and second chance to stay in the game.

He said: “I’d done my scholarship at Tranmere and Lee Jones came in and sold the Academy scheme to me and I enrolled on my three-year Sports Science Degree.

“I like technology, I like being on my laptop, watching football, and the Sports Science Degree gives you experience doing everything – coaching, physiology, psychology, but analysis was the one I really enjoyed the most.

“Pam Richards, who has now left, was my personal tutor and I remember she introduced me to the links with the Welsh FA.

“It was Pam who made me aware of the opportunity with TNS once I graduated, that I could do my Masters fully-funded by TNS and work with them throughout. Everywhere I looked for jobs they were asking for two years’ experience, so I knew I’d have to go out and get experience, and the TNS role was the best of both worlds, getting the qualification on top of the experience, going hand-in-hand on the CV.

“The modules were good. You go out, film games, tag them and bring up problems and approach how you could solve them in training. It gave you that hands-on experience.

“At Brentford we have a really good relationship with the coaches. We can go directly to the manager Thomas (Frank, manager), assistant Brian (Riemor) or coach Kevin (O’Connor) with little things you know they’re working on with the players, and you provide the clips for them to help them.

“Through the week I produce reports, but my main focus is after the game, the de-brief – taking care of everything post-match, how we performed in our game plan and pattern of play.

“Then there’s training, clipping out bits that the manager asks for and sharing with the players.

“It’s very rewarding when you see the players do something in a game and you’re like, ‘I helped with that’. The first time it dawned on me was with Said Benrahma last year, trying to get him to run to the far-post on the last line of defenders.

“The first game against Fulham away last year after lockdown, he scored a goal by doing that, after the week or two previously I’d sent loads of clips to Thomas (Frank) of other elite players doing the same and then we saw it happen in a game.”

While working for TNS, Joe was looking to progress his career, which took a massive leap after a successful application and interview with the West-London based Championship club.

He said: “I applied for a couple of jobs, including Brentford but didn’t think I’d get anywhere near it. The jump was huge – the hours involved, the need for things, the technology and software I had access too was just crazy, everything was next level.”

After experiencing defeat in the play-off final in 2020, and the club losing key players to other teams, Joe and the backroom team were tasked with picking the squad ahead of what was to prove the most successful season in the club’s modern history.

He said: “We had 10 days off in total. Then straight back in. To bounce back the way we have, not making automatic promotion, losing the play-off final, losing Said Benrahma and Ollie Watkins, then bedding in new signings like Ivan (Toney), to bounce back was brilliant.”

Joe’s advice to anyone looking to follow his career path is to consider what Wrexham Glyndwr University has to offer.

He said: “Even more so now I’d say the football and sports science course is probably better suited to that hands-on experience in football whether that be coaching, or analysis.

“I think getting that UEFA B Licence as part of your course now is massive, I would love to do that – so that’s a reason straight away to come to Glyndwr.

“There are very few Uni’s that have links to such an organisation like the FAW (Football Association of Wales). From an analysis point of view, that was literally priceless for me and the access to Colliers Park – that’s the biggest thing for me as well as getting hands-on experience.” 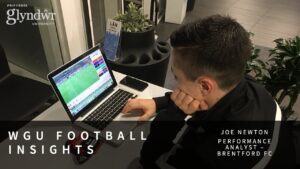 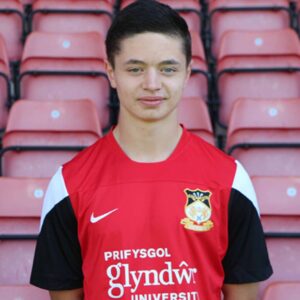