Previous Next
Horatio’s Garden the BBC Lifeline Appeal for September

Horatio’s Garden has announced that it is the beneficiary charity of this month’s BBC Lifeline Appeal. Presented by their ambassador, Alan Titchmarsh MBE, the appeal brings Horatio’s Garden to life by telling the stories of three inspirational people, Craig, Pip and Scarlett.

Horatio’s Garden Midlands, opened at the Midland Centre for Spinal Injuries in Oswestry.

How You Can Help

The Horatio’s Garden BBC Lifeline Appeal is a chance for you, your friends, family, colleagues, and neighbours to discover more about the incredible work of Horatio’s Garden and to see for yourselves just how vital their gardens are for people adjusting to life-changing spinal injuries.

The short appeal film will be broadcast on BBC One on Sunday 26th September at 14:05 whilst the film is also available to watch on BBC iPlayer.

To support the appeal, all you must do is watch the film, share the film, and encourage as many other people as possible to support.

Together, you will help bring Horatio’s Garden to all 11 NHS spinal injury centres.

Over the past month, the BBC Lifeline team have travelled the country to introduce the stunning sanctuaries to the small screen. They’ve also been getting to know Craig, Pip and Scarlett, three incredible people who generously offered to share their stories and memories of times spent in Horatio’s Garden to help them continue supporting people facing extraordinarily difficult times across the UK.

“It is a tremendous honour to be able to support the Horatio’s Garden BBC Lifeline Appeal. For me, this is a chance to demonstrate what I have always believed; that gardens and gardening are great healers. The charity truly deserves the support of every one of us.”

For Craig, Horatio’s Garden Scotland at the Queen Elizabeth University Hospital, Glasgow was a life-saver, a place where he began to see what he was still capable of:

“I don’t think I’d be where I am with my rehabilitation without a charity like Horatio’s Garden. Without it, I don’t think I would have lasted long emotionally.”

For Pip, Horatio’s Garden Midlands at the Robert Jones and Agnes Hunt Orthopaedic Hospital near Oswestry, Shropshire became a place of solace, somewhere she could spend precious time with her husband, Tony:

“I’d not been outside for such a long length of time. I remember going to the garden for the first time; the sun was just peeking through, and it touched some green leaves in front of me. It was just the most amazing feeling.”

For 12-year-old Scarlett, Horatio’s Garden London at the Royal National Orthopaedic Hospital, Stanmore, enabled her to garden and be creative, giving her and her family a place to have fun and enjoy Scarlett’s childhood together:

“Horatio’s Garden gave me a breathing space. I could forget things. It made me feel a bit more like myself.”

Please watch the Horatio’s Garden BBC Lifeline Appeal on Sunday 26th September on BBC One at 14:05 or watch on BBC iPlayer and share the appeal film with all your loved ones.

You have the power to plant hope for even more people like Craig, Pip and Scarlett. 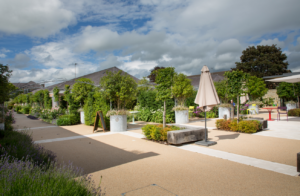 Pictured: Horatio’s Garden at the Midland Centre for Spinal Injuries in Oswestry.