Previous Next
Magical Creatives Live On

The magical creatures created by Fizzgigs, Ellesmere’s community arts group, have been given the chance to live on in a video created by the group.

The 12 creations which starred in the art installation in Ellesmere’s Plantation Wood in July and August have been used to create a fairy-tale story produced by members of the group.

Fizzgigs chairman Ian Andrew said that the trail of magical creatures through the wood attracted hundreds of visitors in the summer.

“It was a fantastic project for everyone involved and now the creatures have the chance to live on in this video and can be seen by everyone forever and for free,” he said. “Some folks couldn’t access all the creatures in the summer for various reasons, but now everyone can.”

The idea for a video story came from Anna Hayes and Claire Cartlidge. The storyline that has resulted was based on an idea by Mary Lewery who created the two creatures at the heart of the action.

The script was written by members of Fizzgigs who are also in the writers’ group, Witzend Writers. Photographs were taken by Ian Andrew while Bob Richards and Anna Hayes recorded the story and added in the photographs. Fizzgigs members provided the voices for the creatures and narrator.

The story tells how Sophie Sprite is looking for her lost friend, Lizzy the Lizard. On the way, she asks for help from eleven wondrous creatures that live in the Magical Plantation.

Pip Elms, of the committee which cares for The Plantation, said: “What a brilliant idea. Our woodland looks beautiful, and the story is enhanced by a lovely background sound-track of bird-song. It brought a tear to my eye watching and listening to it. Well-done, Fizzgigs.”

Whether Sophie finds her friend can be discovered by watching the video!

The video is available on the Fizzgigs’ website:  http://fizzgigs.co.uk/the-magical-plantation  and on the Fizzgigs YouTube channel at https://www.youtube.com/channel/UCCJ2BjbVpIaY9nvFHvpXt5w where the group’s Sprites of Spring animation can also be seen. 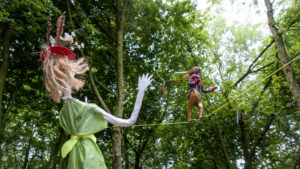