A brave mum is finally taking on the London Marathon next month for her daughter Poppy, and the hundreds of other children who receive care and support from Hope House Children’s Hospices.

Vicki Evans, 45, from St Martins will run the 26.2-mile race will be running for the charity along with six other runners from across Shropshire, North Wales, Cheshire and Powys, and a further 25 who will be taking part in the virtual race.

She was initially due to take on the challenge in 2020, but the pandemic caused the cancellation of the run.

“It’s been a long time coming, but I’m delighted that I will finally be able to take on the London Marathon in support of Hope House and Tŷ Gobaith,” says Vicki.

“Poppy is so full of joy and she has taught me so much because she takes life with two hands and she lives it. I know the marathon is going to be hard but when the going gets tough I will think of Poppy and all the other amazing children and that will spur me on to the finish.”

Poppy was diagnosed with Dravet syndrome just before her fifth birthday – a rare condition that causes life-threatening seizures. Thankfully, the doctor referred her family to Hope House.

“The worst part of Poppy’s condition is that it can cause sudden unexplained death. She has had thousands upon thousands of seizures so we can never rest and think that we are safe. Now we try really hard to live each day with as many smiles as possible.

“When we first visited Hope House with Poppy it immediately felt like home. Poppy loved the playroom with all the toys and the nurses were so knowledgeable. The bedrooms weren’t at all like hospital rooms and that was really important because we had spent so much time in hospital.

“Our biggest fear was seizures happening during the night, but at Hope House there is always a nurse monitoring her and medical expertise on hand. That is a level of care above what we can even provide at home so it gives us complete peace of mind.”

Vicki had set herself the ambitious target of raising £26,200 from her marathon challenge – £1,000 for every mile, but she has since gone past that amount and is now looking to raise as much as possible.

“We’ve had eight years of great support from Hope House that has meant the world to our family and to Poppy,” adds Vicki.

“I’m not sure we would have managed in the same way without our Hope House family and this gives me the opportunity to give something back. The more money I can raise the more care can be given to even more seriously ill children.

“When I’m at the start line waiting to go, I’ll be thinking of all the children and how every penny people are so generously donating will be put to such fantastic use at Hope House and Tŷ Gobaith.”

You can sponsor Vicki, and see an incredible five-minute video she has made about her daughter, at hopehouse.org.uk/poppys-story. 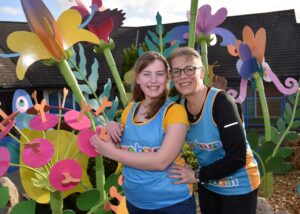