With permission from English Heritage and Historic England, volunteers from the Oswestry Heritage Gateway have completed a small excavation at the Iron Age hillfort on the northern outskirts of Oswestry.

This was the second season of investigation following on from excavations through two of the ramparts last year. Under the direction of Tim Malim from Hampton Heritage Design & Consultancy, the team focused on relocating remains of a roundhouse that was originally found in 1940, so that samples could be retrieved for scientific dating techniques that were not available then.

The roundhouse was constructed with a clay floor and large posts which had been set into holes in the ground and packed around with earth and stones (a reconstruction can be seen at Park Hall Experience). Charcoal from Iron Age cooking fires was also included in the posthole fills, and this has provided samples for radiocarbon dating. Further evidence for housing was found in the back of the stone and earth rampart, which including fragments of daub, fired clay from the walls of a roundhouse. These fragments can also be helpful through the use of thermo-luminescence dating techniques.

The back of the rampart had been marked out by a line of kerb stones, and the main part was a bank made up of large stones and clay, which is now used as a footpath around the top of the hillfort. Although the excavation only lasted for four days, ten volunteers worked with great enthusiasm and dedication to achieve these results. A geophysical survey completed last year and available to view on the Old Oswestry website, shows significant World War 1 activity, as well as some potential Iron Age remains. Evidence for use of the hillfort interior by Park Hall Training Camp soldiers is visible as backfilled trenches on air photographs and in the geophysical survey, and also by the many pieces of shrapnel and rusty iron found during the excavation. It is clear that live fire exercises were conducted on the site over 100 years ago, essential perhaps for military training, but unfortunately terrible for the preservation of Iron Age archaeology at the hillfort!

A book was published in 2020 entitled “Old Oswestry Hillfort and its Landscape” which is available from the Willow Gallery or Booka in Oswestry, or online from Archaeopress. This includes a chapter on how Oswestry Heritage Gateway sees the huge potential the hillfort and surrounding landscape has for social and economic benefit for Oswestry and surrounding communities. Working with English Heritage, the High Street Heritage Action Zone, BID and other partners, Oswestry Heritage Gateway seeks to improve management and conservation of the hillfort, and to promote the value of cultural tourism that its surrounding historic rural landscape can bring to the region. 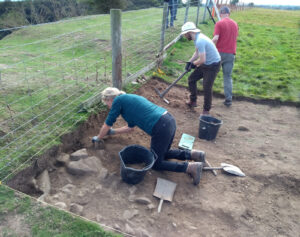 Pictured: Volunteers excavating the back of the rampart.